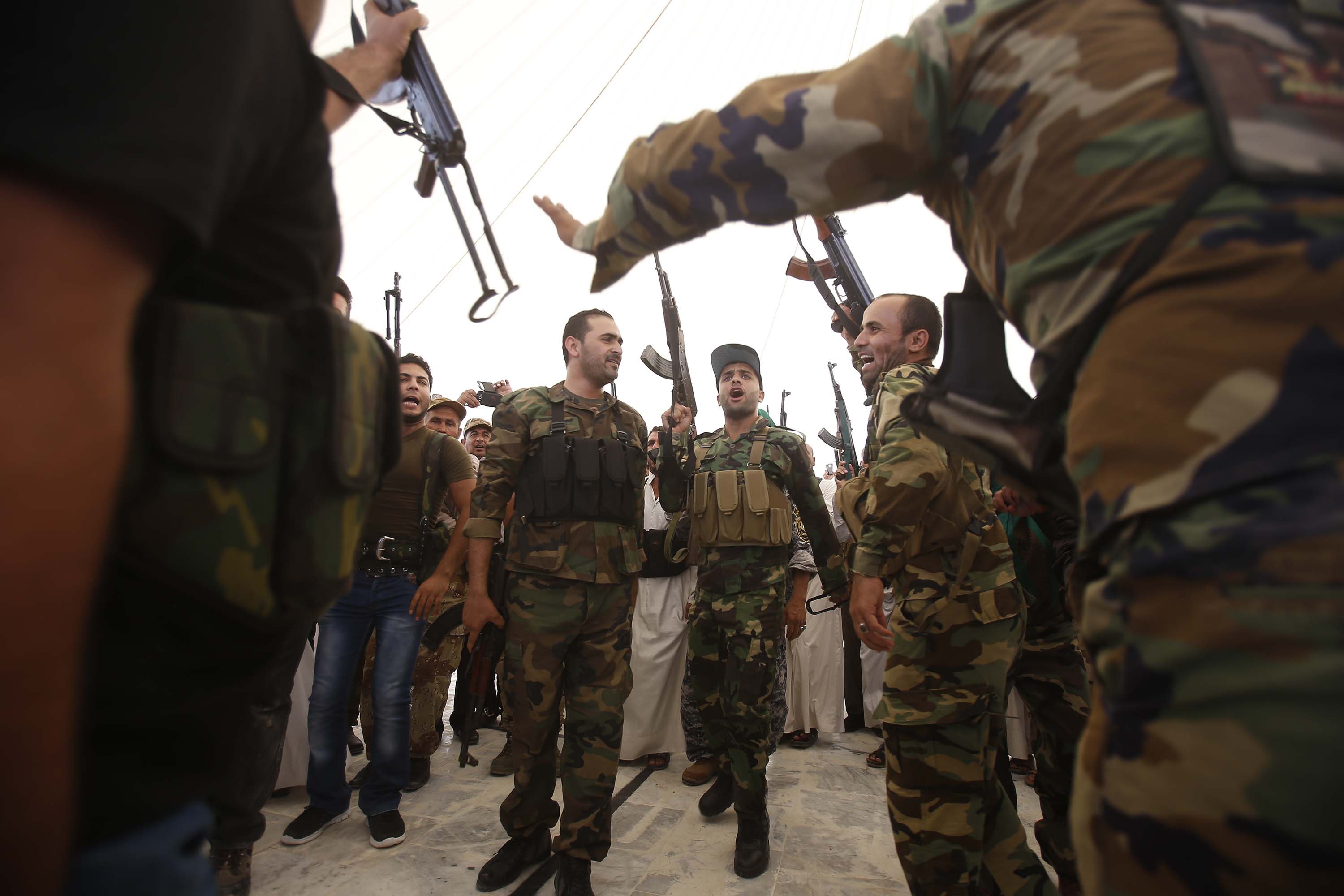 BAGHDAD -- U.S. Secretary of State John Kerry warned Mideast nations on Wednesday against taking new military action in Iraq that might heighten sectarian divisions, after Syria launched airstrikes across the border and Iran flew surveillance drones over the neighboring country.

The U.S. and a senior Iraqi military official confirmed that Syrian warplanes bombed militants' positions Tuesday in and near the border crossing in the town of Qaim. The Iraqi official said Iraq's other neighbors - Jordan, Kuwait, Saudi Arabia and Turkey - were all bolstering flights just inside their airspace to monitor the situation. He spoke on condition of anonymity because he was not authorized to speak to the media.

"We've made it clear to everyone in the region that we don't need anything to take place that might exacerbate sectarian divisions that are already at a heightened level of tension," Kerry said, speaking at a meeting of diplomats from NATO nations. "It's already important that nothing take place that contributes to the extremism or could act as a flash point with respects to the sectarian divide."

Kerry said Baghdad needs to take steps to ensure that Iraq's military can defend the country without relying on outside forces. The U.S. is sending 300 military advisers.

Kerry told CBS News on Tuesday that President Barack Obama is fully prepared to use American military might to help the Iraqi government push back Sunni Islamic militants sweeping across the country's west, but not "in a vacuum" of Iraqi political power.

Mr. Obama's "focus and mine is on the issue of government formation," Kerry told CBS News correspondent Margaret Brennan in Erbil, the capital of the Iraq's northern autonomous Kurdish region, where he was pressing regional leaders to keep backing the central government in Baghdad.

Nevertheless, the involvement of Syria and Iran in Iraq suggests a developing Shiite axis among the three governments in response to the raging Sunni insurgency. And in an unusual twist, the U.S., Iran and Syria now find themselves with overlapping interests in stabilizing Iraq's government.

U.S. officials believe the leadership in Baghdad should seek to draw Sunni support away from the militants led by the Islamic State. The insurgency has drawn support from disaffected Iraqi Sunnis who are angry over perceived mistreatment and random detentions by the Shiite-led government.

Kerry said Iraqi Prime Minister Nouri al-Maliki appears to be standing by his commitment to start building a new government that fully represents its Shiite, Sunni and Kurdish population. But he said the U.S. is watching closely to make sure any new political process does not repeat past mistakes of excluding Iraq's minorities.

On Wednesday, al-Maliki rejected calls for an interim "national salvation government" in his first public statement since Mr. Obama challenged him last week to create a more inclusive leadership or risk a sectarian civil war.

Several politicians, including Ayad Allawi, a secular Shiite who has been named as a possible contender to replace al-Maliki, have called on him to step down and form an interim government that could provide leadership until a more permanent solution can be found.

Al-Maliki, however, insisted the political process must be allowed to proceed following recent national elections in which his bloc won the largest share of parliament seats.

He called on "political forces" to close ranks in the face of the growing threat by insurgents, but took no concrete steps to meet U.S. demands for greater inclusion of minority Sunnis.

Al-Maliki's coalition, the State of the Law, won the 92 seats of the 328-member parliament in the election. In office since 2006, al-Maliki needs the support of a simple majority to hold on to the job for another four-year term. The legislature is expected to meet before the end of the month, when it will elect a speaker. It has 30 days to elect a new president, who in turn will select the leader of the majority bloc in parliament to form the next government.

Qaim, where the Syrian airstrikes took place, is located in the vast and mostly Sunni Anbar province. Its provincial government spokesman, Dhari al-Rishawi, told The Associated Press on Tuesday that 17 people were killed in an air raid there.

The White House said intervention by Syria was not the way to stem the insurgents, who have taken control of several cities in northern and western Iraq.

"The solution to the threat confronting Iraq is not the intervention of the Assad regime, which allowed ISIL to thrive in the first place," said Bernadette Meehan, a National Security Council spokeswoman. "The solution to Iraq's security challenge does not involve militias or the murderous Assad regime, but the strengthening of the Iraqi security forces to combat threats."