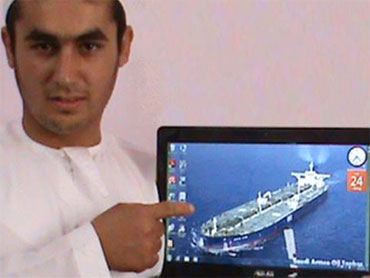 Ten years after the deadly attack on the U.S. Navy destroyer USS Cole in the Gulf of Aden, al Qaeda once again struck at sea with a suicide attack on a Japanese oil tanker.

A UAE Coast Guard source confirmed Friday that the tanker, M. Star, was the target of a terrorist attack while passing through international waters near the Strait of Hormouz on July 28.

''UAE explosives experts who collected and examined samples found a dent on the starboard side above the water line and remains of homemade explosives on the hull," the source said. "Probably the tanker had encountered a terrorist attack from a boat loaded with explosives."

On Wednesday, an al Qaeda-linked group called "Abdullah Azzam Brigades" issued an online statement claiming that M. Star was the target of a kamikaze attack orchestrated by the group. It identified the suicide bomber as Ayyub al-Taishan. The group said that he blew himself up into the tanker in the Straight of Hormouz, between the U.A.E and Oman, causing major damage to the giant ship, which was carrying two million barrels of crude oil.

The attack only caused minor damage to the tanker's starboard side, but it raises serious concerns over al Qaeda's capacity to reach targets at sea, and its renewed interest in maritime Jihad.

Threats of attacks at sea have been monitored on several Jihadi blogs in recent months, as well as messages calling for the revival of this often forgotten Jihadi tradition. In April last year, jihadis published a religious study entitled: "Maritime Jihad: Its Importance, Rewards, and Advantages." The study called for a revival of maritime terrorism, and incited the Mujahideen to include it in their agenda.

"When a Mujahid at sea sets foot on a boat, he leaves all his sins behind his back, and when he steps off the boat, he is cleansed of sins like the day he was born, and god smiles at him," the publication says.

Another study - "Maritime Terrorism: A Strategic Necessity" - was published in April 2008, courtesy of an al Qaeda online publication called "Jihad Press." The study stressed the importance of including maritime operations as part of al Qaeda's strategy, especially around the Yemeni and Saudi shores.

"It has become necessary to develop the battle to include sea operations, and as the mujahideen have managed to form martyr brigades on the ground, the sea remains the next strategic step toward ruling the world and restoring the Islamic Caliphate," the study says.

Al Qaeda has previously claimed an attack on another oil tanker, the Limburg. On October 6, 2002, the French tanker was attacked by an explosives-laden boat while carrying 397,000 barrels of crude oil. The vessel caught on fire and approximately 90,000 barrels of oil leaked into the Gulf of Aden. One crew member was killed, and the damage to the tanker was estimated at $45 million.

Abdullah Azzam Brigades is an al Qaeda-linked group based in Lebanon. It is thought to be led by Saleh al-Qarawy, a wanted Saudi terrorist who's on the kingdom's list of most wanted terrorists. He fought in Iraq under the commandership of slain al Qaeda chief, Abu Mus'ab al-Zarqawi.

The group has claimed several attacks in Egypt, Jordan and Israel since 2005, and took credit for a failed rocket attack that targeted two U.S. warships in al-Aqaba port, in Jordan, back in August 2005. The rockets missed their target and hit a warehouse and a hospital instead, killing one Jordanian soldier.