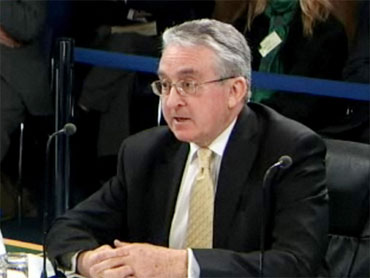 A former legal adviser to the Britain's Foreign Office told the country's Iraq inquiry Tuesday that the government ignored his warning that invading Iraq would be illegal.

Another government lawyer, who resigned in protest at the invasion, said every legal officer in the department shared the opinion it was against international law.

Michael Wood - who was chief legal adviser to the Foreign Office at the time of the 2003 invasion - said he believed the use of force against Iraq was not authorized by the U.N. Security Council.

"He took the view that I was being very dogmatic and that international law was pretty vague and that he wasn't used to people taking such a firm position," Wood said.

She told the inquiry that every legal officer in the Foreign Office believed the war was illegal, but "it was clear that the attorney general was not going to stand in the way" of a government bent on going to war.

Britain's attorney general, Peter Goldsmith, advised just days before the war that the invasion was authorized by a U.N. resolution of November 2002 requiring Saddam Hussein to disarm or face unspecified consequences.

Goldsmith is due to testify at the inquiry Wednesday.

Britain is holding its third and widest-ranging inquiry into the conflict, which triggered huge protests and left 179 British dead before the country's troops withdrew from Iraq last year.

Former Prime Minister Tony Blair is due to give evidence Friday.

For more info:
The Iraq Inquiry