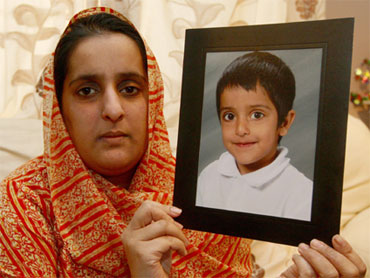 The kidnapping of a 5-year-old British boy in Pakistan may have involved someone in his family, which was perceived as being well-off, a top Pakistani diplomat said Friday.

Sahil Saeed was snatched from his grandmother's house in Pakistan's Jehlum city overnight Wednesday after robbers held the family at gunpoint for several hours, British officials and the boy's family said. The robbers also took some household possessions and demanded a large ransom to return the child, whose picture and story made British and some Pakistani front pages Friday.

The case is among a soaring number of kidnappings for ransom in Pakistan, where Taliban-led militancy and a struggling economy have fueled crime. Most victims are Pakistani nationals.

Wajid Hassan, Pakistan's envoy to London, said investigators were probing whether someone in Sahil's family was involved.

"The perception is that they had a lot of money," Hassan told The Associated Press. "So somebody from inside of the family who is less fortunate might have arranged it."

British Immigration Minister Phil Woolas said arrests had been made in Pakistan and that police were following strong leads.

"This is the No. 1 priority for the Foreign Office in Pakistan," he told BBC television.

Pakistani police investigator Raja Tahir Bashir said they were questioning some suspects in connection with the abduction, but declined to give details. "God willing, we will recover the boy very soon," he said.

British officials have been in touch with the boy's parents, who had been scheduled to return to Britain from their holiday on Thursday, said George Sheriff, the press attache at the British High Commission in Islamabad.

"I told them I don't have that much money ... I can't afford that," said Saeed, who the High Commission in Islamabad said was Pakistani and not a dual British citizen.

Criminal gangs are suspected in most kidnappings for ransom in Pakistan, but the Taliban and other militant groups are thought to profit from many of the abductions. The sums demanded can run into the millions of dollars, though the captors often settle for less.

The British boy's mother made an emotional televised appeal for his safe return.