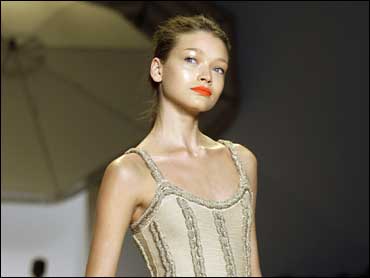 Fashion models should be 16 years of age or older and should be screened for eating disorders, according to a report published Friday by the organizers of London Fashion Week.

But the British Fashion Council report stopped short of recommending a ban on ultra-thin models.

Madrid and Milan banned ultra-thin models from their fashion week runways last year, and organizers in Paris, London and elsewhere have also come under pressure to do the same.

The British report, written by a panel composed of fashion designers, models and an eating disorder specialist, instead asked modeling agencies to certify that their models had been examined for eating disorders by an accredited list of medical experts.

Up to 40 percent of models may have eating disorders, compared with an estimated 3 percent of the overall population, the report said.

The report said that most of those interviewed by the panel said "weigh-ins" before catwalk appearances would be impossible to enforce.

Eating disorder charity BEAT welcomed the recommendation, but warned that certification could be difficult in practice.

"Identifying whether someone has an eating disorder can be quite a lengthy process," BEAT chief executive Susan Ringwood said. "It can take a number of investigations and interviews. It's a psychiatric condition."

Blood tests and physical examinations can identify symptoms of malnutrition, but diagnosing an eating disorder requires interviewing a patient, she said.

Instead of weigh-ins, the British Fashion Council hopes to combat eating disorders through medical tests, mentoring programs and workshops. Other recommendations backed by the report include criminal background checks on agents and photographer working with young models, random drug testing backstage, more funding for research into eating disorders, and the creation of a model health watchdog.

The report's recommendations are nonbinding, although the fashion council has pledged to implement all the recommendations within its remit. Some of the actions suggested, such as increased funding for eating disorder research, would require outside help, the council said.