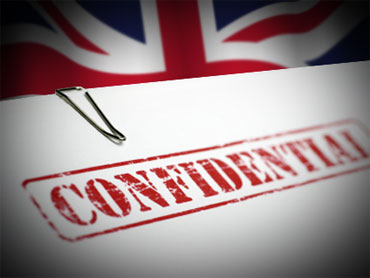 She was thought to be one of Germany's prized secret agents, described as beautiful and languid and capable of infiltrating an enemy camp, obtaining secret plans of attack, and then delivering them to her bosses.

A former ballerina, Marina Lee was said to have naturally light blonde hair, spoke several languages, and a page in her security service dossier made note of intelligence passed on by the French: Very nice legs.

The intelligence on Lee - or Maria Ley, plus other aliases she was believed to possess - are part of a cache of files from Britain's MI5, Britain's domestic spy agency, released Thursday by the National Archives.

Along with detailing the World War II activities of alleged spies, the files document the efforts of the intelligence community to unpick the activities of the German conglomerate Siemens and determine the loyalty of the company's employees.

In a file called the "Siemens-Halske-Schuke Combine," British agents are reminded of a 1936 law that said "every German man and woman must render service to the Fatherland in time of war and that Germans who live abroad, including those of dual nationality, are bound to serve when called up."

Operatives were asked to look into the company's employees in far-flung locales such as Iran, India, Iceland and Chile, while others were sent to interrogate local citizens who'd come into contact with characters deemed suspicious.

Those interviews didn't always go smoothly: A woman with a weak heart, interviewed in England by MI5 about a German houseguest who worked for Siemens - and who was believed to be an enemy agent - kept bursting into tears.

It turned out, the investigator reported back to London, that the woman knew nothing of her guest's activities, which was likely a good thing because "she would probably be dead from a heart attack in any case if she knew he had."

There are 170 files in Thursday's release. So far, nearly 4,500 British security service files have been placed in the archives in Kew, in west London. They are open for the public to view, and some are available online.

This batch of declassified files also include a dossier on Wolf Mankowitz, who wrote the screenplay for the first film incarnation of the James Bond classic "Casino Royale." MI5 was worried he might be a communist agent, even though the file contains a report from his commanding officer who said he observed Mankowitz during his time in the army - and wasn't worried.

"Even if he possesses communist views I do not think he has the personality or strength of character to pass them on to his fellow soldiers," the report said. "There is no evidence that he has attempted to air these views whilst with this unit."

The security service got nervous again in the mid-1950s, when Mankowitz headed to Moscow for a visit to the World Youth Fair, and returned proclaiming that he'd like to set up a British-Soviet film project. Their interest dwindled, however, by 1958, and his file was closed.

Previously released files have revealed that MI5 was concerned about Hitler Youth cycling around Britain, warning they could be spies. Others have shown MI5 hired an astrologer to try and match the forecasts given to Adolf Hitler by his own personal astrologers.

The dossier on Lee reads like the outline of a spy novel. She was believed to have been born in St. Petersburg, Russia, and then was trained as a ballerina. She fled Russia when her parents were killed by the Bolsheviks, eventually marrying a Norwegian. There's no photograph of her in the file, but her physical beauty is described in glowing terms.

One report details the debriefing a captured German agent called Gerth Van Wijk gave the secret service. He told them a story another agent called "von Finckenstein" had passed on about Lee.

He said a German commander, Gen. Eduard Dietl, was facing defeat and retreat near the Norwegian port of Norvik in 1940. But according to the dossier, Lee was able to infiltrate the headquarters of British Gen. Sir Claude Auchinleck.

"She returned to Dietl and with the information she had obtained he was able to adjust his position and defeat Auchinleck," the dossier says. "Finckenstein described her as blond, tall, with a beautiful figure, refined and languid in manner."

Lee was believed to have moved on to Spain, and the dossier includes a 1947 alert warning police and border agents that her arrival in Britain "should be reported to MI5 immediately." But the file contains no further reports on Lee, and her file was closed in 1960.