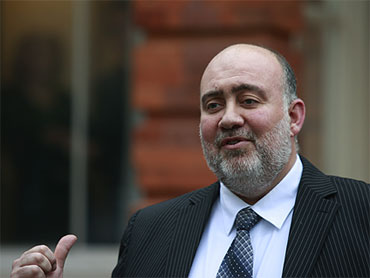 Britain took the extraordinary step Tuesday of expelling an Israeli diplomat for the first time in more than 20 years, after concluding there was compelling evidence that Israel was responsible for the use of forged British passports in the plot to slay a senior Hamas operative in Dubai.

British Foreign Secretary David Miliband said trust between the two countries had been badly dented, demanded formal assurances it never happen again and — in an unusual step — issued travel advice to U.K. citizens warning their identity details may be at risk if they visit Israel.

Miliband told the House of Commons that the expelled diplomat, who has not been named, was removed following an investigation into the use of 12 fake U.K. passports in the Jan 20. slaying in Dubai.

"We have concluded that there are compelling reasons to believe that Israel was responsible for the misuse of the British passports," Miliband said.

Britain's Serious and Organized Crime Agency found the forged British passports were copies of authentic documents handed to Israeli officials for inspection either in Israel or other countries, Miliband said. He said the fakes were high-quality and almost certainly "made by a state intelligence service."

"The actions in this case are completely unacceptable and they must stop," Miliband said.

However, Miliband insisted Britain has drawn no conclusions over who is responsible for the killing of Hamas official Mahmoud al-Mabhouh, saying investigation by Dubai authorities was continuing.

Dubai authorities accuse Israel's Mossad of carrying out al-Mabhouh's killing in a luxury hotel room, and have identified at least 26 suspects in an alleged hit squad — members of which used forged European and Australian passports.

Interpol has a wanted list of 27 people in connection with the slaying. Israel has neither confirmed nor denied any involvement in al-Mabhouh's death.

Israel's ambassador to London Ron Prosor said he was "disappointed by the decision of the British government" but pledged that the two countries would retain close ties. "The relationship between Israel and the United Kingdom is of mutual importance," he said.

France and Ireland are also carrying out inquiries into the use of four forged French and six Irish passports. Ireland's foreign ministry said it would consider further action once an investigation with Irish police is completed.

Dubai police believe three Australian passports and a German one were also used in the killing.

At least 15 of the names used by the suspected killers match those of Israeli citizens who are dual nationals of Western countries. All have denied involvement.

Miliband said in the cases of the 12 British citizens, there was "no evidence to suggest that those 12 were anything other than wholly innocent victims of identity theft."

He said one victim told investigators "to go to bed a citizen and wake up as a wanted terrorist is shocking."

"The fact that this was done by a country which is a friend, with significant diplomatic, cultural, business and personal ties to the UK, only adds insult to injury," Miliband said.

Miliband had been due to attend a reception Tuesday to mark the refurbishment of the Israeli Embassy in London, but was forced to cancel in order to make his statement to Parliament.

The expulsion of an Israeli diplomat from London is the first since 1988, when attache Arie Regev was removed for "activities incompatible with diplomatic duties," a euphemism for espionage. Britain also barred a second Israeli, Jacob Barad, from returning to Britain in 1987. Both men were suspected of coordinating Mossad activity in the U.K. and of involvement in the forgery of British passports.

Miliband, who said he discussed the case Monday with Israeli Foreign Minister Avigdor Lieberman, confirmed that Britain had chosen which diplomat would be expelled and said "it was not a random" choice.

But British and Israeli officials declined to confirm reports that the diplomat was Mossad's London station chief.

Arieh Eldad, a lawmaker from Israel's National Union — a hardline opposition party — called Friday for the military attache of the British Embassy in Israel to be expelled in response.

Diplomatic expulsions are a rare sanction against foreign governments. Britain kicked out four Russian diplomats in 2007 over the country's refusal to extradite to London a suspect in the poisoning death of Alexander Litvinenko.