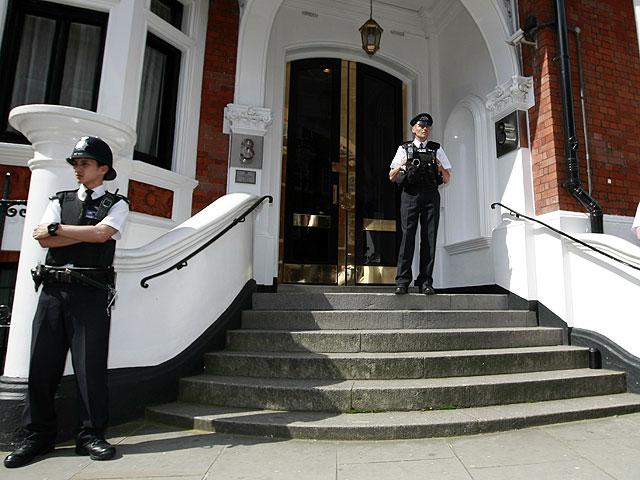 (AP) LONDON - British police served Julian Assange on Thursday with a demand that he report to a police station as the first step in his extradition to Sweden to face sex crime allegations.

The letter was delivered to Ecuador's London embassy, where the WikiLeaks founder has been holed up for nine days.

The Metropolitan Police said it had "served a surrender notice upon a 40-year-old man that requires him to attend a police station at a date and time of our choosing. This is standard practice in extradition cases and is the first step in the removal process."

The force did not identify Assange by name but offered the statement when asked about him.

Assange is seeking political asylum in Ecuador in a bid to escape extradition for questioning about alleged rape and sexual assault against two women.

He denies the claims, and says the case against him is politically motivated.

Assange has said he fears the United States plans to charge him for leaking hundreds of thousands of secret U.S. documents via the secret-spilling WikiLeaks website. A U.S. soldier, Pfc. Bradley Manning, a 24-year-old Crescent, Oklahoma, native, has been charged with aiding the enemy by passing the secret files to WikiLeaks and is awaiting trial.

The 40-year-old Assange was arrested in London in December 2010 at Sweden's request and has spent the last 18 months on bail fighting extradition.

He has exhausted legal appeals in Britain, and has been ordered deported to Sweden.

British officials say he is beyond their reach as long as he stays in the embassy, but police say they will arrest him if he leaves for breaching his bail conditions.

Ecuador, whose left-wing President Rafael Correa has offered Assange words of support in the past, says it is considering his asylum request.