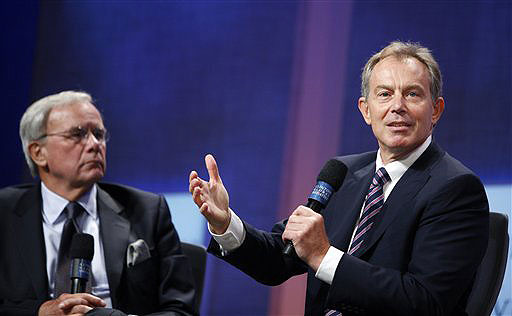 Yes, the very same ladies who curled America, Switzerland and Canada right off the ice. And of course you've all heard of curling? Ok, neither had I, until last week, the entire British nation sat up half the night to see the nail-biting final beamed in live from Salt Lake City. Actually, none of us had a clue about curling. So I'd better explain.

Curling is played with a sculpted lump of granite - 42 lbs of it - with a handle on top. Curling is stone throwing on ice, and invented in Scotland where the men all wear skirts - called kilts - and nothing underneath. So, you'll understand why the whole idea of chucking a great big stone around in sub-zero temperatures seems perfectly normal to the Scots.

Now I guess you're asking when did Britain last come back from a Winter Olympics loaded with medals? Fair pointÂ… 1936, actually. That's because we don't understand winter. One flurry of snow and all the trains stop dead, the traffic grinds to a halt and London is cut off. Basically we've learned to be good losers... until curling. The art of a good curl is getting "skip" (that's the Skipper) to fling the stone over the near Hog line, then 34 yards past the far Hog line, swept forward by the "sweepers" (yes, the rest of the team is armed with brooms!) and "Skip" shouts "sweep" and they all sweep at great speed in front of the moving stone which melts the ice so the great lump of granite can go even faster. It ends up in the "house", which is curling's word for the target rings painted on the ice....or else its a "take-out", which means your stone hits their stone and slides it clean away. Still with me?

It's so exciting over here that there is absolutely nowhere in England - nowhere at all - where you can watch or play the game. Scotland? Yes. But the men wear skirts in Scotland, as I explained earlier. Canada? Yes. But they've got a lot of ice in Canada, and a lot of relatives in Scotland with skirts on. Even so the Canadians managed to lose. And last week's final was just so long and tedious that the authorities even had to issue a warning to the audience....please stop using your cellular phones during the game. "Hello, Mom, you're not going to believe what I'm watching... and how long I've been watching it."