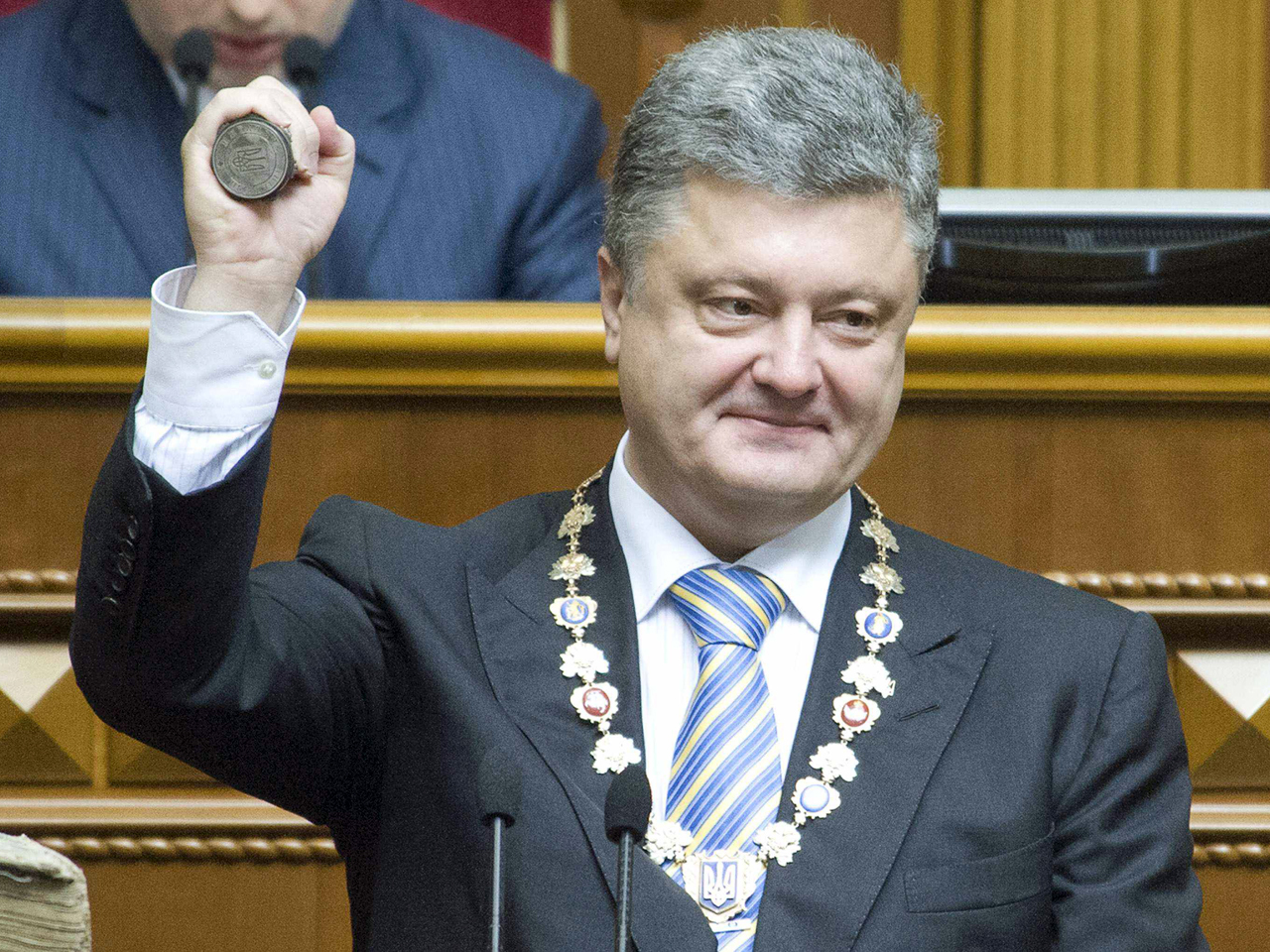 KIEV, Ukraine -- Ukraine's new president on Saturday called for dialogue with the country's east, gripped by a violent separatist insurgency, and for armed groups to lay down their weapons but said he won't talk with rebels he called "gangsters and killers."

Petro Poroshenko's inaugural address after taking the oath of office in parliament gave little sign of a quick resolution to the conflict in the east, which Ukrainian officials say has left more than 200 people dead.

He also took a firm line on Russia's annexation of Crimea this spring, insisting that the Black Sea peninsula "was, is and will be Ukrainian." He gave no indication of how Ukraine could regain control of Crimea, which Russian President Vladimir Putin has said was allotted to Ukraine unjustly under Soviet leader Nikita Khrushchev.

President Obama spoke with Putin about the Ukraine crisis Friday in Normandy, France, during events commemorating the 70th anniversary of D-Day.

Hours after Poroshenko's speech, Putin ordered security tightened along Russia's border with Ukraine to prevent illegal crossings, Russian news agencies said. Ukraine claims that many of the insurgents in the east have come from Russia; Poroshenko on Saturday said he would offer a corridor for safe passage of "Russian militants" out of the country.

"This statement doesn't concern us," said the so-called prime minister of the insurgent Donetsk People's Republic, Alexander Borodai, according to the RIA Novosti news agency.

Poroshenko offered amnesty to rebels who "don't have blood on their hands." But "I don't believe it," said Valery Bolotov, the insurgent leader in the Luhansk region. Rebels in both Luhansk and Donetsk have declared their regions independent.

The new president promised "I will bring you peace," but did not indicate whether Ukrainian forces would scale back their offensives against the insurgency, which Ukraine says is fomented by Russia.

Russia has insisted on Ukraine ending its military operation in the east. Ambassador Mikhail Zurabov, representing Moscow, at the inauguration, said Poroshenko's statements "sound reassuring," but "for us the principal thing is to stop the military operation," adding that the insurgents should also stop fighting in order to bolster the delivery of humanitarian aid, RIA Novosti reported.

As president, the 48-year-old Poroshenko is commander-in-chief of the military and appoints the defense and foreign ministers. The prime minister is appointed by the parliament.

Poroshenko, often called "The Chocolate King" because of the fortune he made as a confectionery tycoon, was elected May 25. He replaces Oleksandr Turchynov, who served as interim president after Russia-friendly president Viktor Yanukovych fled the country in February after months of street protests against him.

The fall of Yanukovych aggravated long-brewing tensions in eastern and southern Ukraine, whose majority native Russian speakers denounced the new government as a nationalist putsch that aimed to suppress them.

Within a month, the Black Sea peninsula of Crimea was annexed by Russia after a secession referendum and an armed insurgency arose in the eastern provinces of Donetsk and Luhansk.

"I am calling on everyone who has taken arms in their hands - please lay down your arms," he said, according to a translator. He also called for early regional elections in the east and promised to push for new powers to be allotted to regional governments, but he rejected calls for federalization of Ukraine, which Moscow has advocated.

He also said he would seek early parliamentary elections because "the current composition of the parliament is not consistent with the aspirations of the nation." The current parliament, elected in 2012 with a large contingent from Yanukovych's former party, is to stay in place until 2017.

Poroshenko insisted that Ukrainian would remain the sole state language of the country, but promised "new opportunities for the Russian language," without giving specifics.

He assumed power a day after meeting Putin at D-Day commemoration ceremonies in France.

Putin has denied allegations by Kiev and the West that Russia has fomented the rebellion in the east, and he insisted Friday that Poroshenko needs to speak directly to representatives from the east.

After the low-key inauguration ceremony, which included a choir in traditional national costume singing the national anthem, Poroshenko went to the square outside the landmark Sophia Cathedral for a ceremonial troop inspection.

Taras Danchuk, a 37-year-old spectator at the square who was wearing a traditional embroidered tunic, said he supported Poroshenko's strategy for trying to negotiate an end the eastern conflict.

"Out of emotion I would like to say that we should destroy the terrorists, but that is not possible without sacrificing the civilians who live there, so there will have to be negotiations," he said.