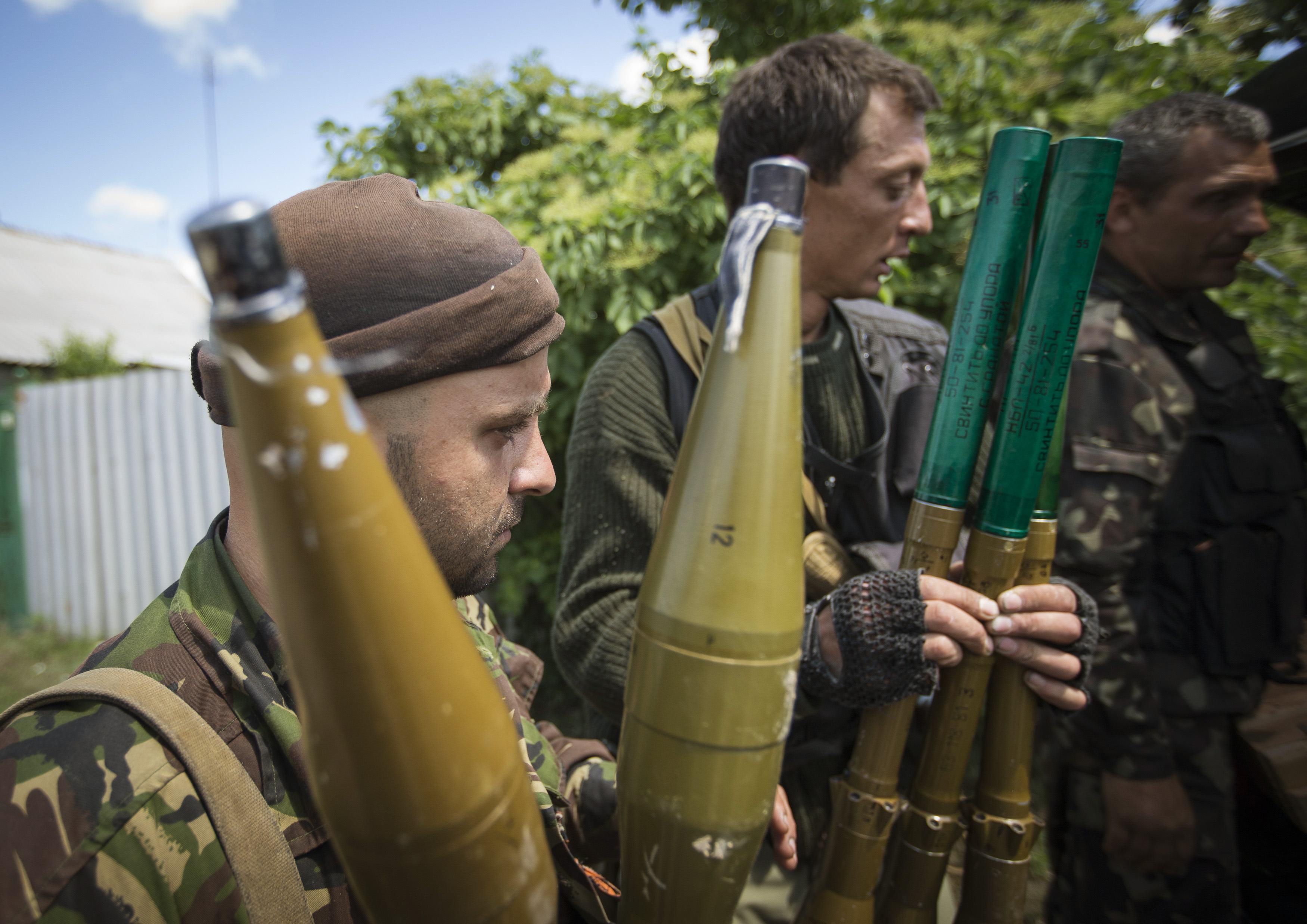 YANAKIYEVE, Ukraine -- Seven Ukrainian troops were killed in overnight fighting in the restive east, an official said Friday, as clashes between government forces and pro-Russia rebels flared ahead of the publication of a presidential peace plan that includes a unilateral cease-fire.

Separatists who want to split from the government in Kiev were operating tanks in the region, a particular sore point for Ukraine, which accuses Russia of letting the vehicles and other heavy weaponry cross the border.

A senior U.S. administration official told CBS News correspondent Margaret Brennan that the U.S. believes that Russian soldiers are maintaining posts along the Ukrainian border to support the separatists. The U.S. says they have redeployed "significant" forces within a few kilometers of Ukrainian territory, the closest they have been since the invasion of Crimea, Brennan reports. The U.S. has additional information that more forces will arrive within the coming weeks.

Vladislav Seleznev, spokesman for Ukrainian forces in the east, said in addition to the deaths, 30 troops were injured in fighting near the village of Yampil in the Donetsk region. He said 300 rebels were killed, but that could not be immediately verified.

An Associated Press reporter saw pro-Russia fighters moving in a column with two tanks and three armored personnel carriers near the town of Yanakiyeve in the direction of Horlivka in the separatist Donetsk region. The tanks flew small flags of a pro-Russia militia but otherwise had no markings. The fighters declined to say what they were doing, other than it was a "secret operation."

Russian President Vladimir Putin has voiced concern about the Ukrainian military operation against the rebels but has resisted both the rebels' pleas to join Russia and repeated calls from Russian nationalists for Putin to send troops into Ukraine.

NATO, however, reported Thursday that Russia was resuming a military buildup at the Ukrainian border.

Ukrainian President Petro Poroshenko discussed the details of his peace plan on the phone Thursday with Putin. Poroshenko's office said he emphasized the need for introducing effective border controls and quickly releasing hostages seized by the rebels.

Poroshenko has said the plan will start with a short cease-fire and include amnesty for pro-Russia fighters who have not committed serious crimes, a corridor for fighters from Russia to leave the country, joint security patrols, early local and parliamentary elections, and protections for the use of the Russian language.

Rebel leaders have dismissed the plan and it remains to be seen to what extent they would comply.

"This is not a matter of some sort of concentration of forces, but of the strengthening of border controls of the Russian Federation," Peskov was quoted as saying by the Itar-TASS news agency.

NATO Secretary General Anders Fogh Rasmussen said on Thursday, however, that Russia had deployed a few thousand additional troops to the border, calling it "a very regrettable step backward."

"If they're deployed to seal the border and stop the flow of weapons and fighters, that would be a positive step. But that's not what we're seeing," Rasmussen said in London.

CBS News national security correspondent David Martin said a U.S. official had confirmed an increase of about 2,000 to 4,000 Russian troops on the border and said one assessment being considered in Washington was that the new troops could be establishing safe havens from which pro-Russian fighters could conduct cross-border operations into Ukraine.

Brennan reports that the U.S. is "confident" in its assessment that Russia prepped additional tanks for departure from a deployment site in southwest Russia Thursday. This is the same deployment site that held the tanks and rocket launchers that were sent from Russia into Ukraine last week.

A senior NATO military officer told The Associated Press in Brussels on Friday that the Russians were issuing misleading statements to cover their troop movements -- something they had also done in Crimea, along the border with Ukraine and now in eastern Ukraine. He spoke on condition of anonymity because he was not authorized to reveal NATO information.

Separately, Putin's foreign policy aide, Yuri Ushakov, said the Russian president was committed to dialogue on Ukraine and was planning to have a phone conversation with President Obama in the coming days.

Ushakov also mentioned that Putin, on a visit to Austria next week, would be meeting with the chairman of the Organization for Security and Cooperation in Europe to discuss Poroshenko's peace plan.

The U.N. said earlier this week that at least 356 people, including 257 civilians, have been killed since May 7 in eastern Ukraine and 34,000 have been forced from their homes by the fighting.