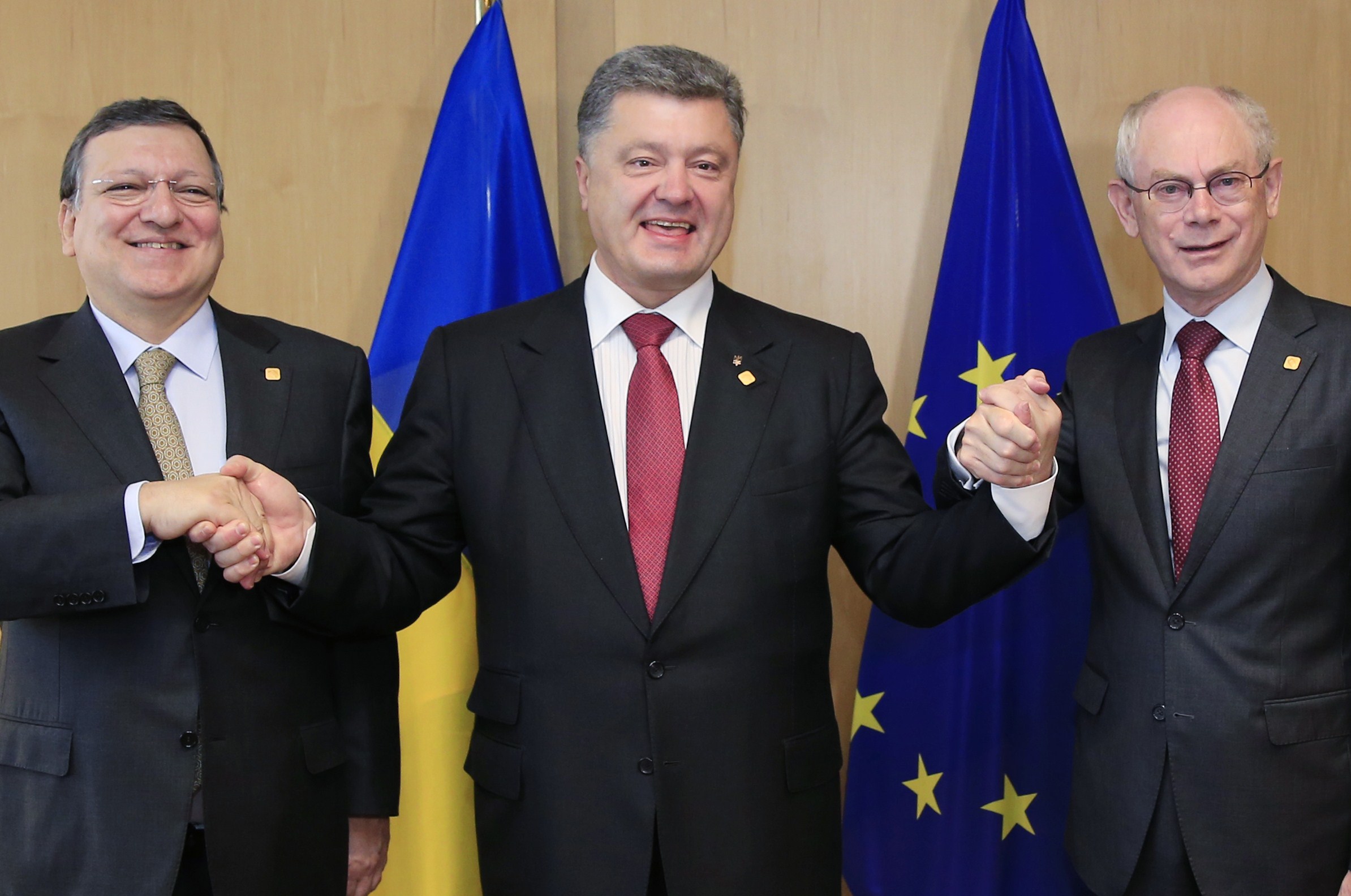 BRUSSELS -- Ukraine's new president signed a trade and economic pact with the European Union on Friday, pushing his troubled country closer into a European orbit and angering Russia, which warned of unspecified consequences.

A beaming President Petro Poroshenko called it "maybe the most important day for my country" since its independence from the Soviet Union in 1991.

European Union leaders, meanwhile, decided not to immediately impose new sanctions on Russia for destabilizing eastern Ukraine. In a statement, however, the leaders said new sanctions have been prepared so they could be imposed "without delay" and listed several demands for Vladimir Putin's government and the pro-Russian rebels in eastern Ukraine.

Poroshenko's pro-Moscow predecessor, Viktor Yanukovych, backed out of signing the agreement in November and the bloody protests that followed toppled his government, sparking an insurgency in the east and Russia's annexation of the mainly Russian-speaking Crimean Peninsula.

Agreements signed Friday let businesses in former Soviet republics of Ukraine, Moldova and Georgia trade freely in any of the EU's 28 member nations without tariffs or restrictions, as long as their goods and practices meet EU standards. Likewise, goods and services from the EU will be sold more easily and cheaply in the three countries.

Closer ties between Ukraine and the EU have long been overshadowed by Russian opposition. Moscow is loath to see its historic influence wane in its strategic neighbor, which it considers the birthplace of Russian statehood and of Russian Orthodox Christianity.

Georgia has already lost chunks of its territory and Black Sea coast to rebels backed by Russia after a brief war with Russia in 2008.

Putin did not immediately comment on the trade pact, but in recent days has signaled that he wants to de-escalate the conflict ahead of talks later Friday by the EU's heads of state and government on whether to ramp up sanctions against Russia over its conduct toward Ukraine.

"The most important thing is to guarantee a long-term cease-fire as a precondition for meaningful talks between the Kiev authorities and representatives of the southeast (of Ukraine)," Putin said Friday.

The EU leaders gave the Russian government and the rebels until Monday to take steps to improve the situation in eastern Ukraine, including agreeing on a way to verify the cease-fire, returning three border checkpoints to Ukraine, releasing all captives and launching "substantial negotiations" on Poroshenko's peace plan.

A second round of talks was being held Friday in eastern Ukraine between representatives of the mutinous regions and the Kiev government, also involving envoys from Russia and the EU, Russian news agencies quoted rebel leader Andrei Purgin as saying.

Poroshenko's office confirmed that a weeklong cease-fire, which both sides have accused each other of violating, was set to expire at 10 p.m. local time.

Interior Minister Arsen Avakov told Ukraine's Fifth Channel that at least 20 servicemen had been killed since the rebels agreed to the cease-fire, although he did not elaborate. He said the government would respond "harshly and adequately" to all rebels who did not put down their arms by Friday evening.

An overnight battle for a National Guard base in the eastern city of Donetsk left rebels in control early Friday. All servicemen were set free but the commander was taken captive, according to the National Guard's website.

In Brussels, Poroshenko made no mention of the cease-fire as he triumphantly signed the agreement.

"What a great day!" he said. "Maybe the most important day for my country after independence day."

A rally was scheduled to be held at Kiev's Independence Square, the site of the protests that toppled Yanukovych, but the mood was still subdued Friday after Poroshenko's signing. A trickle of people filed by votive candles and portraits of the so-called "Heavenly Hundred," the protesters killed - many by snipers - near the square in February.

Andrei Berezov, a 30-year-old driver who lives in a Kiev suburb, said he favored Poroshenko's decision to bring Ukraine closer to Europe.

"I have lived and worked in Madrid, there's no comparison, it's black and white," he said. "There's no corruption, paying a policeman 50 hryvnias, it wouldn't happen there."

"I think it will take a long time," she said. "As they say, hope dies last, and for now we hope things will be good."

The U.N. said Friday that 110,000 Ukrainians had fled to Russia this year and another 54,000 fled their homes but stayed in Ukraine as the government fought with separatists in the mostly Russian-speaking east. Long lines of cars stuffed with belongings backed up at the border heading into Russia this week.

European Commission experts estimate the deal will boost Ukraine's national income by 1.2 billion euros ($1.6 billion) a year. Ukraine won a 15-year transition period during which it can use tariffs to support its domestic auto industry from competition. Moldova will gradually eliminate protections for its dairy, pork, poultry and wine producers over 10 years, while the EU placed limits on imports of chicken from both countries.

Perhaps more important than the trade clauses is an accompanying 10-year plan for Ukraine to adopt EU product regulations. Such rules ease the way for international trade beyond Europe.

The trade deal also demands that Ukraine change the way it does business. Adopting EU rules on government contracts, competition policy and copyright for ideas and inventions should improve Ukraine's economy by reducing widespread corruption and making it more investor-friendly.

Amanda Paul, a policy analyst at the Brussels-based think tank European Policy Center, said Russia has levers to inflict serious economic pain on Ukraine, Moldova and Georgia through trade restrictions, cuts in energy supplies or the deportation of migrant workers from those countries.

In Brussels, Poroshenko reminded EU leaders of the Ukrainians who died opposing Yanukovych's government and in the ongoing battle against the pro-Russian insurgency in the country's east. He said Ukraine "paid the highest possible price to make her European dreams come true."

He asked EU leaders to take a further step and formally pledge that one day Ukraine can join the EU as a full-fledged member.

That "would cost the European Union nothing," he said, "but would mean the world to my country."