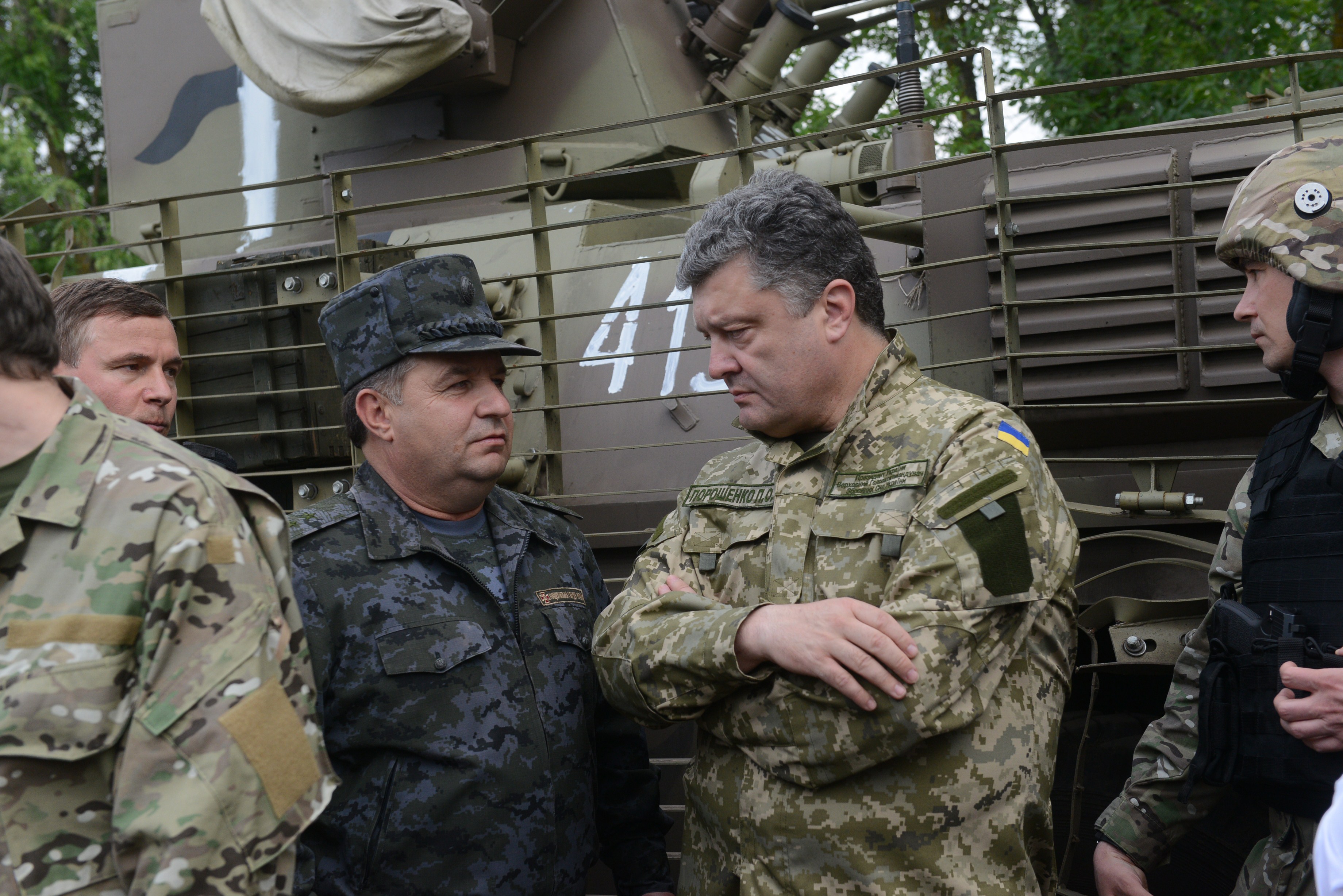 KIEV, Ukraine -- Ukrainian President Petro Poroshenko ordered his forces to cease fire Friday and halt military operations for a week against pro-Russia separatists in the country's east - the first step in a peace plan he hopes will end the conflict that has cost more than 350 lives.

The Kremlin immediately dismissed the peace plan, saying that it looks like an ultimatum and lacks an offer to start talks with the insurgents.

Poroshenko, speaking during his first trip as president to the troubled east, said troops would still fire back if separatists attacked them or civilian residents.

Separatists in the Donetsk and Luhansk regions have declared independence from his government in Kiev, occupied public buildings and fought with heavy weapons against troops from the government in Kiev. Rebel leaders have previously dismissed Poroshenko's plan and it remains to be seen to what extent they would comply - or how much pressure Russia would put on them to cease fire as well.

A senior U.S. administration official told CBS News correspondent Margaret Brennan that the U.S. believes that Russian soldiers are maintaining posts along the Ukrainian border to support the separatists. The U.S. says they have redeployed "significant" forces within a few kilometers of Ukrainian territory, the closest they have been since the invasion of Crimea, Brennan reports. The U.S. has additional information that more forces will arrive within the coming weeks.

CBS News national security correspondent David Martin said a U.S. official had confirmed an increase of about 2,000 to 4,000 Russian troops on the border and said one assessment being considered in Washington was that the new troops could be establishing safe havens from which pro-Russian fighters could conduct cross-border operations into Ukraine.

Meanwhile, the U.S. issued new sanctions against seven Ukraine separatists accused of stoking violence against their capital in Kiev.

Russia denies supporting the insurrection and has said that Russians fighting in Ukraine are doing so as private citizens.

The Kremlin said a statement Friday carried by Russian news agencies that Poroshenko's peace plan was released "deliberately or accidentally" as Ukrainian forces fired on the Russian territory near the border, wounding a Russian customs officer.

It said the Russian side was waiting for Ukrainian "explanations and excuses" over the incident.

Russian President Vladimir Putin has voiced concern about the Ukrainian military operation against the rebels but he has resisted both the rebels' pleas to join Russia and repeated calls from Russian nationalists for Putin to send troops into Ukraine.

Poroshenko's ceasefire order specified that Ukrainian forces would halt offensive operations at 10 p.m. (2000 GMT, 3 p.m. EDT). The move is intended to give separatists time to lay down their arms and fighters from Russia safe passage to leave the country.

He stressed the ceasefire was temporary and would end at 10 a.m. on June 27.

"The Ukrainian army is ceasing fire," he said in a statement carried on his official website. "But this does not mean that we will not resist in case of aggression toward our troops, we will do everything to defend the territory of our state."

The next steps include joint security patrols to prevent crime and looting, new local and parliamentary elections, and steps to protect language rights of the many Russian speakers in the area.

In the longer term, Poroshenko has suggested decentralizing some political authority to the regions and taking steps to secure the language rights of people who speak Russian as their main language. The White House and European leaders have urged support for the plan.

Poroshenko made announcement while speaking with residents in the town of Sviatohirsk in the Donetsk region. It was his first visit as president to the troubled east since being inaugurated June 7. Refugees from the rebel-held town of Slovyansk where some of the worst fighting has taken place were also at the meeting.

Earlier in the day, at the border crossing near Izvaryne in the separatist Luhansk region, an AP reporter saw a line of 100 or more cars waiting for hours to cross from Ukraine into Russia as people fled the unrest. Some of the cars were piled high with possessions. The United Nations said earlier this week that 34,000 people had been displaced by the fighting.

One car had a sign saying "children" on the windshield. A man named Sergei, who would not give his last name for fear of retaliation, said "people are simply leaving everything and trying to escape the war."

Seven Ukrainian troops were killed and 30 troops wounded in overnight fighting in the restive east as clashes between government forces and pro-Russia rebels flared ahead of the cease-fire. Separatists were operating tanks in the region, a particular sore point for Ukraine, which accuses Russia of letting the vehicles and other heavy weaponry cross the border.

Vladislav Seleznev, spokesman for Ukrainian forces in the east, said the fighting took place near the village of Yampil in the Donetsk region.

An Associated Press reporter saw pro-Russia fighters moving in a column with two tanks and three armored personnel carriers near the town of Yanakiyeve in the direction of Horlivka in the separatist Donetsk region. The tanks flew small flags of a pro-Russia militia but otherwise had no markings. The fighters declined to say what they were doing.

Before the cease-fire announcement, Putin's foreign policy aide, Yuri Ushakov, said the Russian president is committed to dialogue on Ukraine and is planning to have a phone conversation with U.S. President Barack Obama in the coming days.

Ushakov also said Putin, on a visit to Austria next week, would be meeting with the chairman of the Organization for Security and Cooperation in Europe to discuss Poroshenko's peace plan.