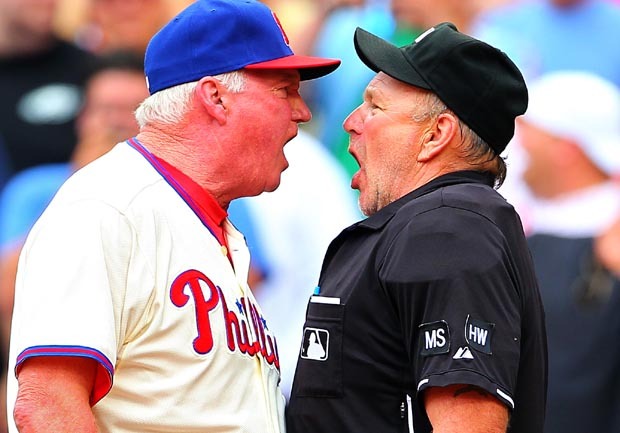 (CBS News) Bob Davidson has a bad reputation. The veteran MLB umpire has been nicknamed "Balkin' Bob" for his penchant to call balks (incorrectly). His blown call robbed a player of a home run in the 2006 World Baseball Classic. In 2010, he tossed not only a player and a pitching coach from a game but a fan. In 1989, he even ejected the Montreal Expos mascot. (Yes, he threw a furry orange mascot named Youppi! out of a baseball game).

Well, the 59-year-old Davidson finally got punished for his dubious job performance. Major League Baseball on Friday suspended the umpire one game for "repeated violations of the Office of the Commissioner's standards for situation handling."

Players have long complained of Davidson's "situation handling." In 1993, Phillies catcher Darren Daulton (one of three players to get tossed by Davidson in a single game) had this to say: "He's one of those impact umpires. In my opinion, the game was on ESPN, and he couldn't wait to suit up and make an impact. He's one of those guys." Last season, Davidson ranked fourth on a players' poll of worst umpires by Sports Illustrated.

Davidson's suspension stems from a nose-to-nose screaming match with Phillies manager Charlie Manuel on Tuesday. (Manuel was also suspended one game by the league).

Manuel came out of the dugout in the eighth inning of the Phillies-Astros game to argue that Davidson had interfered with his catcher after a dropped third strike. The pair got into a heated profanity-laced exchange as the raucous Philly crowd chanted "Charlie! Charlie!" In a shocking turn of events, Davidson ejected Manuel from the game.

But while Manuel was suspended for his singular outburst, Major League Baseball was careful to state that Davidson is being punished for a culmination of several incidents.