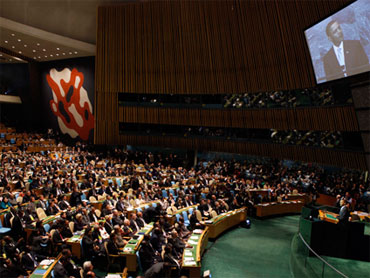 (AP)
To hear world leaders and others addressing the United Nations Summit on Climate Change, the threat could not be more real and the need more urgent to reduce emissions of greenhouse gases.

But in stark contrast to the earnest statements is the carbon footprint associated with their gathering.

It happens every autumn: midtown Manhattan becomes the motorcade capital of the world. Each foreign leader in town has a convoy of vehicles. Some of them, like President Obama's motorcade, are 20-to-30 vehicles in length. It's so long - it seems that when the front of it reaches the U.N., the back end is still back at his hotel.

Exacerbating the annual exercise in diplomatic gridlock are police actions, blocking intersections and closing streets for security to facilitate motorcade movements. It renders countless other vehicles immobile while waiting for motorcades to pass, their engines idling but still blowing exhaust into the midtown air

Does it undermine the goal of the climate change summit and cause the pledges of environmental concern to ring hollow?

Asked about it, White House climate change negotiator Todd Sterns had a suggestion.

"I think the U.N. should make a pledge to electric vehicle motorcades within five years," he said.

Right. As soon as all U.N. diplomats pay their parking tickets.