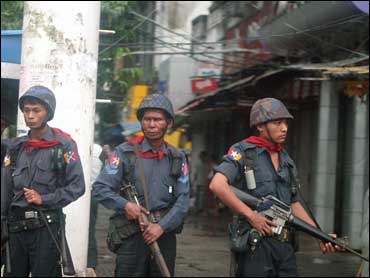 A U.N. envoy held back-to-back meetings Sunday with detained opposition leader Aung San Suu Kyi and the Myanmar junta in his bid to defuse the political crisis that has engulfed the country.

But Ibrahim Gambari, the U.N.'s special envoy to Myanmar, failed to see either the junta leader, Senior Gen. Than Shwe, or his deputy early Sunday, and was returning late Sunday to the junta's headquarters for a possible third meeting.

Gambari "looks forward to meeting ... Than Shwe," before he leaves the region, a U.N. statement said.

It said Gambari met with the acting prime minister, the deputy foreign minister and the ministers of information and culture in the junta's new bunker-like capital Naypyitaw, 240 miles north of Yangon. It was possible that he was carrying a message from Suu Kyi to the leadership.

While these officials have senior positions in the ruling coterie, the final say in all decisions rests with Than Shwe, and to some extent Deputy Senior Gen. Maung Aye.

SKY News correspondent Andrew Wilson reports that the streets of Rangoon and Mandalay are now back under the control of troops and police. "Any gatherings are spontaneous, they're very small and dispersed very quickly," he said.

Rosalind Russell of SKY News reports a huge security presence around the area where Aung San Suu Kyi lives: "Roads are closed off within a kilometer-radius of her house and trucks and soldiers are guarding the roads. We have heard that there has been an attempt at a demonstration in the eight-mile area surrounding Aung San Suu Kyi's house, but whether demonstrators have been able to gather in force is not clear."

Gambari's meeting with Suu Kyi lasted about 90 minutes, the diplomats said on condition of anonymity, citing protocol. Details of the meeting were not immediately known.

"We want Mr. Gambari to stay here long enough to get underway a genuine process of national reconciliation," Britain's ambassador Mark Canning said. "He should be given as much time as that takes. That will require access to senior levels of government as well as a range of political actors."

The flurry of diplomatic efforts came after the military government launched a bloody crackdown last week on demonstrations that began Aug. 19 to protest a sharp increase in fuel prices.

The protests drew international attention after thousands of Buddhist monks joined the people in venting anger at decades of brutal military rule. At the height of the protests, some 70,000 people turned out.

The junta, which has a long history of snuffing out dissent, cracked down Wednesday and Thursday, opening fire into crowds of peaceful protesters and arresting scores. Though the official death toll is 10, foreign diplomats and dissident groups say the number is likely much higher.

Despite Gambari's meetings, it was not clear how much influence the junta will allow him to exert on Myanmar's affairs.

The U.N. has repeatedly failed to bring about a reconciliation between the military government and the pro-democracy opposition. Gambari and his predecessor, Razali Ismail of Malaysia, have also failed to secure freedom for Suu Kyi, the 1991 Nobel Peace prize winner who has come to symbolize the struggle for democracy in Myanmar.

Her National League for Democracy party won the 1990 general elections, which the junta called after crushing a much larger pro-democracy movement in 1988. But the party was never allowed to take power, and many of its top members were jailed.

Suu Kyi has spent nearly 12 of the last 18 years under house arrest and has rarely been seen by the outside world. Gambari was the last foreign official to have met her on Nov. 11, 2006.

On Sunday, the number of troops in Yangon, the largest city, swelled to about 20,000 after reinforcements arrived overnight, ensuring that almost all demonstrators would remain off the streets, another Asian diplomat said on condition of anonymity.

"The security forces are demonstrating their strength," he said. "I think the chance of protesters coming to the road and mobilizing enough people to topple the junta is zero."

A few monks were seen in a neighborhood on their customary morning round for alms.

"We are not going to protest any more. Rather we will conduct peaceful protests. We Buddhists believe that dhamma (Buddha's teachings) will finally win over evil," said one monk.

People suspected of leading or organizing this week's rallies continue to be arrested, the Asian diplomat said, estimating the total number could be as high as 1,000 including several prominent members of the NLD. They joined an estimated 1,100 other political detainees who have languished in jails since before the current turmoil began.

"We apologize to foreigners for feeling unsafe ... People in this country are very nice and gentle, but the soldiers are very rough," said one resident. Monks and residents spoke on condition of anonymity fearing reprisals.

The crackdown has triggered an unprecedented verbal flaying of Myanmar's generals from almost every corner of the world - even some criticism from No. 1 ally China, which said it was "very much concerned about the current situation."

It urged the ruling junta to "exercise restraint and use peaceful means to restore its stability as soon as possible."

Many people see China, Myanmar's biggest trading partner, as the most likely outside catalyst for change.

But China, India and Russia do not seem prepared to go beyond words in dealing with the junta, ruling out sanctions as they jostle for a chance to get at Myanmar's bountiful and largely untapped natural resources, especially its oil and gas.

SKY News' Wilson says the White House may consider a raft of sanctions on top of the ones it has already issued, on the lines of the sanctions in place against North Korea: "Going after bank accounts in other Asian countries, and going after their allies and making them choose between American business and Burmese business."

Whether such a choice would be considered for China - Myanmar's closest ally, and a $262 billion trading partner with the U.S. - is unclear.

On Sunday, Pope Benedict XVI joined world leaders in expressing serious concern about the situation in Myanmar. About 1 percent of the country's 54 million people are Catholics. Another 3 percent belong to other Christian denominations.

"I am following with great trepidation the very serious events," the pontiff said during an appearance to pilgrims at his summer residence near Rome. "I want to express my spiritual closeness to the dear population in this moment of the very painful trial it is going through."

Still, Catholic leaders in Myanmar have ordered clergy not to get involved in the protests. Bulletins posted in churches in the capital today said worshipers can do as they please, but clergy won't be joining them in any demonstrations.

Protests featuring supporters of the democracy movement continued around the world.

They called for a boycott of the 2008 Beijing Olympics.

"That's the only thing that will shake up the Chinese government," one Burmese immigrant told CBS News correspondent Margie Shafer. "They're scared of people boycotting their Olympics."

A spokesman for the Chinese consulate said demonstrators shouldn't politicize the Chinese Olympics.