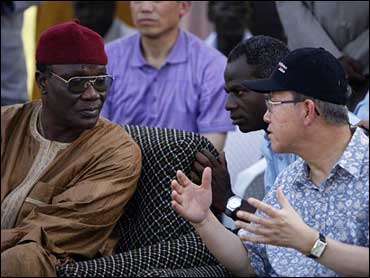 Ban told reporters Friday that "Libya has been playing quite a constructive role" in bringing the splintered rebel groups of Sudan's Darfur region together, which could bolster Libya's international standing.

Libya was chosen as the venue after extensive consultations with all the key parties by the U.N. and the African Union, who will be mediating the new negotiations.

Gadhafi, who is expected to meet the secretary-general during his two-day visit, has hosted two meetings of Darfur rebels.

More than 200,000 people have died and 2.5 million have been uprooted since ethnic African rebels in Darfur took up arms against the Arab-dominated Sudanese government in 2003, accusing it of decades of neglect. Sudan's government is accused of retaliating by unleashing a militia of Arab nomads known as the janjaweed - a charge it denies.

The secretary-general, who has made peace in Darfur a top priority since taking the reins of the U.N. on Jan. 1, spent four days in Sudan - including a brief visit to a camp for some of the millions forced to flee their homes. He then flew to Chad, which has been seriously affected by the spillover of the Darfur violence.

Chadian President Idriss Deby, speaking to reporters after his talks with Ban, said he had discussed hosting a preliminary meeting for Darfur rebels before the peace conference set to start Oct. 27 in Libya "to smooth out the rough edges so that we avoid the failures" of past negotiations.

Speaking to reporters Friday night, the secretary-general welcomed Deby's proposal. "I think it is necessary and it is good and I am grateful to President Deby's kind offer and flexibility," he said.

"I think Chad can make (a) good contribution, and I'm convinced that it can happen before we begin (the) formal meeting - and we will work toward that," Ban said.

U.N. envoy Jan Eliasson and African Union envoy Salim Ahmed Salim have been spearheading international efforts to get the key Darfur players back to the negotiating table and will be mediating the negotiations in Libya.

Eliasson said he would like all the parties to remain in Libya once negotiations begin, which observers said will step up pressure for a settlement.

During the next seven weeks, Eliasson said he and Salim "will be in contact with the movements as much as possible to discuss the negotiating team that they will want to have, the agenda, the format of the meeting."

The new negotiations follow a U.N. and AU conference in Arusha, Tanzania, in early August that brought Darfur rebels together to agree on a common platform for talks on issues such as power- and wealth-sharing, security, land and humanitarian issues.

Seven major rebel leaders came, but there was one important holdout - Abdel Wahid Nur, who leads a major faction of the Sudan Liberation Movement and wants the fighting to stop before negotiations start.

Libya has a history of destabilizing its neighbors by supporting various rebel groups - including in Chad. But in more recent years it has tried to improve its international image, and has hosted meetings of Darfur rebel groups aimed at pushing the peace process.

As a member of both the Arab League and the African Union, Libya could be a bridge between ethnic Arabs and ethnic Africans in Darfur, and between and Arab and African states that have been divided over how to respond to the Darfur crisis. Arab states have tended to support the Arab-dominated central government in Sudan.