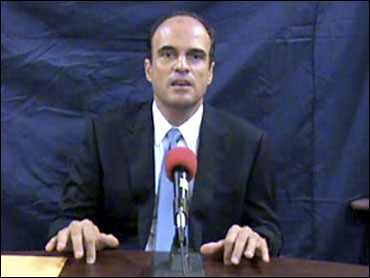 U.N. investigators say a Guatemalan lawyer who appeared in a posthumous video accusing the country's president of his murder actually contracted the hit men who killed him.

Attorney Rodrigo Rosenberg made a video before he was slain charging that Guatemalan President Alvaro Colom would be involved if he were killed.

U.N. investigator Carlos Castresana says Rosenberg asked cousins of his first wife to help him contact a hit man. Castresana is head of a special investigation group that was invited by the government to probe the May 10 murder.

Castresana says evidence shows Rosenberg bought two cell phones: one to communicate with his killers, another to leave himself threatening messages.

On the video, Rosenberg says officials might want to kill him because he represented businessman Khalil Musa, who was slain in March along with his daughter. The lawyer says Musa, who had been named to the board of the Guatemala's Rural Development Bank, was killed for refusing to get involved in purported illicit transactions at the bank.

The Guatemalan government is the majority shareholder in the bank.

Rosenberg said the alleged illicit transactions "range from money laundering to the embezzlement of public funds and nonexistent programs operated by first lady Sandra de Colom, as well as the financing of front companies used by drug traffickers."