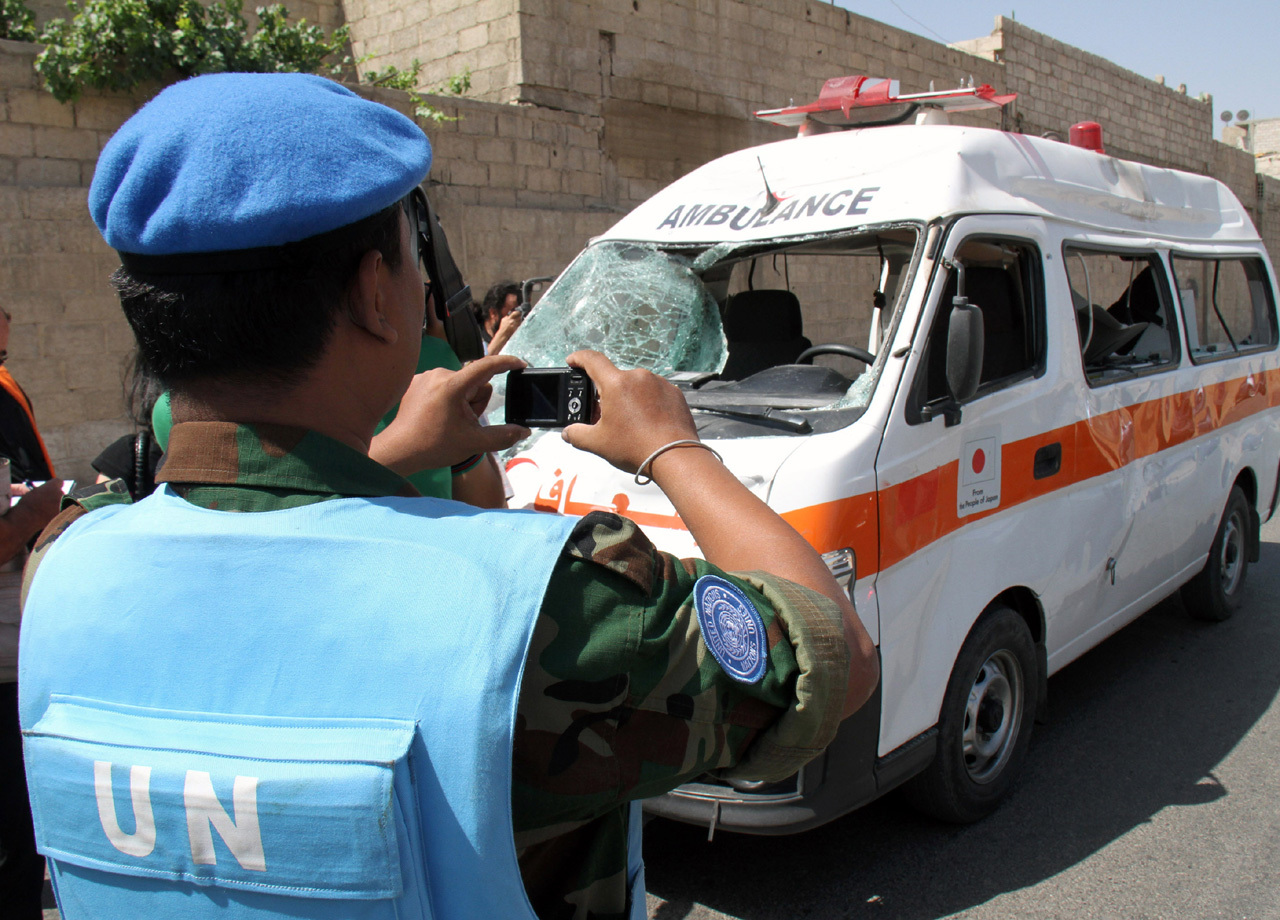 (CBS/AP) BEIRUT - U.N. observers in Syria suspended their activities and patrols Saturday because of escalating violence in the country, the head of the mission said, the strongest sign yet that an international peace plan for Syria is disintegrating.

Maj. Gen. Robert Mood said rising bloodshed over the past 10 days was posing significant risks to the lives of the some 300 observers in the country, and was impeding their ability to carry out their mandate.

The observers were sent to the country after international envoy Kofi Annan brokered a peace plan that included a cease-fire that was supposed to take effect on April 12. But both sides have continued to stage daily attacks and the observers themselves have been caught up in the violence on several occasions.

In an impassioned plea to both the Assad forces and the opposition, Maj. Gen. Mood said that the United Nations is committed to the people of Syria and to bringing an end to the violence while promoting political dialogue. But nonetheless, the "intensification of armed violence across Syria over the past 10 days," he said, is limiting the observers' ability to observe, verify and report, as well as to assist in local dialogue and stability projects - "basically impeding our ability to carry out our mandate.

"The lack of willingness by the Parties to seek a peaceful transition, and the push towards advancing military positions, is increasing the losses on both sides: innocent civilians - men, women and children - are being killed every day. It is also posing significant risks to our observers," Maj. Gen. Mood said.

The suspension of activities will be reviewed on a daily basis, Mood said, with an eye toward resuming operations.

"With the dramatic uptick in the fighting in Syria, the attacks against civilians, and the suspension of the U.N. Mission of unarmed observers, many experts now believe it may be the death knell of the Kofi Annan peace plan, at least for for the time being," said CBS News foreign affairs analyst Pamela Falk.

"U.N. representatives of the Mission in Syria said that it appears both the Assad government forces and the opposition are now seeking a military solution and have abandoned an interest in a political transition," Falk reports.

She said the latest development will sideline the impact of any possible bilateral talks between U.S. President Obama and Russian President Vladimir Putin at their upcoming meeting in Mexico, "because there appears to be little interest in negotiations from the warring sides in Syria."

"The longer the fighting goes on and the more brutal the attacks become against civilians, the more difficult it is to shape a political solution or a unity government, which is what was envisioned by the U.N.-Arab League envoy Kofi Annan," Falk said.

In a statement issued Saturday the White House called again on the Assad regime to uphold its commitments under the Annan cease-fire plan: "At this critical juncture, we are consulting with our international partners regarding next steps toward a Syrian-led political transition as called for in Security Council Resolutions 2042 and 2043. The sooner this transition takes place, the greater the chance of averting a lengthy and bloody sectarian civil war."

The suspension signals the unraveling of Annan's plan as the conflict that began in March 2011 with peaceful protests challenging the regime spirals closer toward civil war. Activists say some 14,000 people have been killed in the conflict.

Western powers have pinned their hopes on the plan, in part because there are no other options on the table. The international community has little appetite for the military intervention that helped oust Libya's Muammar Qaddafi, and several rounds of sanctions have failed to stop the bloodshed.

"The lack of willingness by the parties to seek a peaceful transition, and the push towards advancing military positions is increasing the losses on both sides," Mood said. "It is also posing significant risks to our observers."

The observers have been tasked with monitoring the cease-fire and supporting the full implementation of Annan's six-point plan, which was supposed to lead to talks between the sides.

Last week, an observers' convoy was blocked and attacked as it was trying to head to the town of Haffa in the coastal Latakia region, where troops had been battling rebels for a week.

The observers only managed to get in once government troops had seized the area back from the rebels.

On May 15, a roadside bomb damaged observers' cars shortly after they met with Syrian rebels in the northern town of Khan Sheikoun. A week earlier, a roadside bomb struck a Syrian military truck in the south of the country just seconds after Mood drove by in a convoy.

Still, their presence has been an important source of independent information, particularly as Syria bars journalists from reporting freely in the country.

Despite fears that violence could significantly worsen without the their presence on the ground, prominent activist Rami Abdul-Rahman of the Syrian Observatory for Human Rights said it was better for the U.N. teams to leave.

"We haven't seen anything beneficial from them. If they are independent — so what?" he said. "A lot of crimes happened in Syria, and they couldn't do anything."

He called on the international community to more actively intervene to halt the bloodshed in Syria.

"The situation can't get worse than this: are we afraid that it's a civil war? Well it is a civil war. The situation is difficult. The international community's silence on Syria is working to destroy Syria," Abdul-Rahman said.