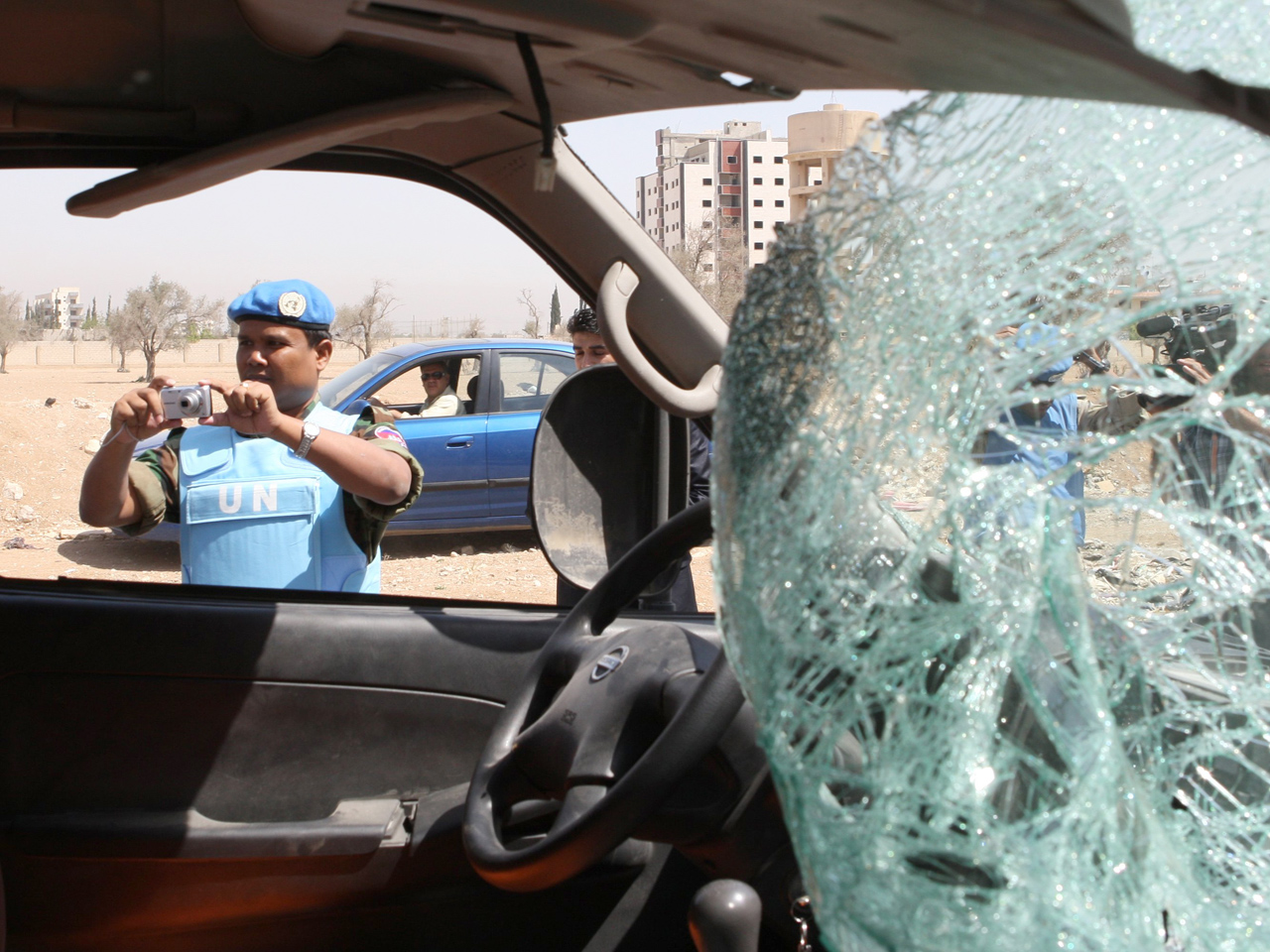 (CBS/AP) BEIRUT - The head of the U.N. observers in Syria said Friday a spike in bloodshed is derailing the mission to monitor and defuse more than a year of violence, raising questions about how effective the unarmed force can be in a conflict that every day looks more like a civil war.

U.N. Peacekeeping Chief Spokesman Kieran Dwyer told CBS'News' Pamela Falk that they are just pulling back for now, but not formally or informally suspending the mission. All 300 observers remain in the country, but they have had to limit their activities for the time being, Dwyer said, and mission will continue to evaluate its presence in Syria on a day-by-day basis.

The troubles facing the observer mission are the latest sign that an international peace plan for Syria is disintegrating. Western powers have pinned their hopes on the plan, brokered two months ago by special envoy Kofi Annan, in part because there are no other options on the table. There is little support for military intervention, and several rounds of sanctions have failed to stop the bloodshed.

"Violence over the past 10 days has been intensifying willingly by the both parties, with losses on both sides and significant risks to our observers," Maj. Gen. Robert Mood told reporters in Damascus, the Syrian capital.

Mood also said there was a concern among the states providing observers that the risk is approaching an unacceptable level — suggesting the violence could prompt the nearly 300 observers to pull out of the country at some point. He did not provide further details.

Mood's comments were the clearest sign yet that Annan's peace plan is falling apart. The regime and the opposition have ignored a cease-fire that was supposed to go into effect April 12.

The Britain-based Syrian Observatory for Human Rights called on the observers to "either work on stopping the killings or leave." The group said the observers' role has become to "witness the killing in Syria" rather than implement Annan's six-point plan.

It was the harshest criticism of the observers by an activist group since they started their work in April.

Some analysts say that even if the number of observers increased by tenfold, it still would be very difficult for them to report and investigate acts of violence throughout the country.

"Even 3,000 observers will not be enough," said Hisham Jaber, a former Lebanese army general who heads the Beirut-based Middle East Center for Studies and Public Relations.

Still, the presence of the observers is considered critical to understanding the conflict in a country where the government prevents reporters from operating independently.

Mood said all the observers are frustrated because the violence has not only persisted but actually increased over the past few days.

"We would like to see last week, yesterday, not tomorrow, next week a different situation where those who have their fingers on the triggers, whomever they are, make the decision to take their fingers off the triggers and give the Syrian people a chance to move forward," he said.

On Friday, the Syrian regime kept up a ferocious offensive on rebel areas around the country in one of the most serious escalations in violence since Annan brokered the nominal truce.

An activist in the northern city of Aleppo said troops backed by helicopters and tanks were engaged in "raging battles" several miles (kilometers) away in the rebel-held town of Anadan, and in other towns in the district.

Elsewhere, activists said Syrian troops heavily shelled the central city of Homs, which has come under attack for days.

The violence did not stop thousands of Syrians from taking part in demonstrations against President Bashar Assad on Friday, marching from mosques, gathering in town squares, chanting, singing and dancing against the regime.

"Even if I die, I will still be a rebel," sang the leader of a demonstration in the northern city of Idlib, according to amateur video. "Oh Bashar, you will flee."

Nationwide, at least 28 people were reported killed when security forces opened fire on protests, according to activists. That toll could not be independently verified.

Eight protesters were killed in the southern town of Busra al-Sham after Syrian forces fired a shell near the Khaled Bin Walid mosque, according to activists and amateur videos that appeared to show bloodied men sprawled lifeless on a street. The video could not be independently verified. The state-run news agency, SANA, blamed the attack on terrorists who planted bombs near the mosque.

Syrian troops have been sweeping through villages and towns in northern, central, southern and seaside provinces this week to reclaim territory.

The military on Wednesday overran the town of Haffa in the coastal Latakia province, pushing out hundreds of rebels after intense battles that lasted eight days.

Selma Tareq, 42, a Haffa resident who fled to Turkey last week, said many families remain trapped in the mountains.

She said Syrian regime forces set fire to forests in an apparent attempt to stop people from fleeing and prevent rebels from reinforcing.

"We were afraid to drink water from the wells fearing they could be poisoned so we made cats and other animals drink first," said Tareq, who is now in a refugee camp in Yayladagi, Turkey's southernmost border with Syria, with her sons, Omar, 5, and Osman, 8.

"We stored dry bread and softened it in water to survive," she said.

The siege of Haffa, a Sunni-populated village, had become a focus of international concern because of fears the uprising against the Assad regime is evolving into a sectarian civil war pitting the president's minority Alawite sect against the majority Sunnis and other groups. Recent mass killings in other Sunni areas have fueled those concerns.

U.N. observers have reported a steep rise in violence in Syria in recent weeks — and not just on the part of the government.

"The attacks by the armed opposition on official buildings and government checkpoints are becoming more effective, and the government is taking great losses," Mood said Friday.

Activists say some 14,000 people have been killed since the uprising against Assad began in March 2011.

"Sexual violence in detention is one of many horrific weapons in the Syrian government's torture arsenal, and Syrian security forces regularly use it to humiliate and degrade detainees with complete impunity," said Sarah Leah Whitson, Middle East director at Human Rights Watch.

HRW said it does not have evidence that high-ranking officers commanded their troops to commit sexual violence but said it had information indicating that no action has been taken to investigate or punish government forces who did.