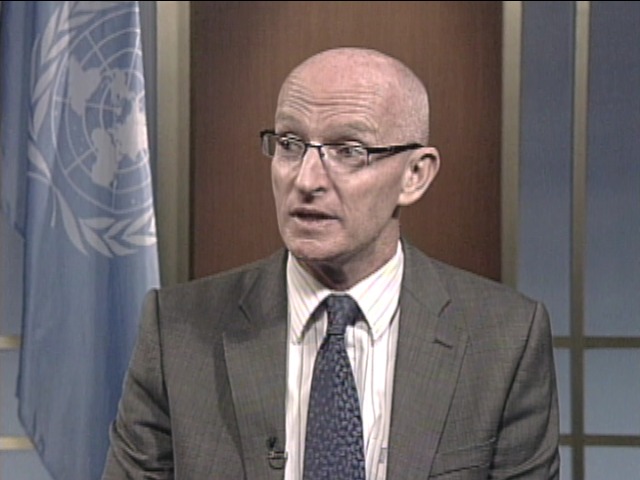 (CBS News) With violence increasing in Syria, U.N. observers entered the town of al-Haffeh after being turned away the week before. What they found was deeply disturbing: the stench of dead bodies and the town abandoned.

Kieran Dwyer, the chief spokesman for U.N. Peacekeeping Operations, expressed his view of the conflict. "One of the reasons we were trying to reach Haffeh," he said, "was to be there and to witness and to observe and to show all sides that the United Nations was observing what they were doing."

But, more to the point, Dwyer expressed his reaction to what the observers found. He said, "It is tragic, worse than tragic, it is a scandal that our teams were blocked from getting there."

As President Obama meets with Russian President Vladimir Putin in Mexico this week, the Syria conflict will be on the front burner.

Part I: Stench of death

Watch a video of Kieran Dwyer, chief spokesman of the U.N. Department of Peacekeeping Operations, speaking with CBS News foreign affairs analyst Pamela Falk on what U.N. observers in Syria found when they arrived at the deserted town of al-Haffeh:

Dwyer said, "Our team of observers entered Haffeh after trying to get access since June 7; we found evidence of fighting. Our observers could smell dead bodies but we did not find lots bodies; it was a ghost town."

Part II: What can observers do?

"When the Security Council mandated the unarmed observers to go into Syria back in April, it was designed to observe a ceasefire," Dwyer said.

He also said that the violence in Syria is intensifying:

"The observers are spread across eight towns across the countries; what we've seen in the past five to six days is a both a serious escalation of the amount of violence but also a change in the nature of the violence. We've seen both sides seeming to go for the military option at huge expense to the civilian population. The government is shelling into heavily populated areas like the city of Homs; it's flying helicopter attacks across some of these populated zones; the opposition too seems to be far more planned and coordinated in its attacks on government forces and public infrastructure. So in the middle of all, that you get...the civilians trapped. "

Watch a video of Kieran Dwyer, chief spokesman of the U.N. Department of Peacekeeping Operations, speaking with CBS News foreign affairs analyst Pamela Falk on how the escalating violence in Syria is threatening the security of U.N. observers touring the country:

"They have had to tailor back some of their activities and they have to make that judgment call every day, in every location," said Dwyer. "The government [of Syria] is responsible for their security, but if they cannot guarantee their security, there are times when their patrols when they simply cannot go out."

"Our observers have seen the impact of this conflict on children," said the spokesman. "We are talking with civilians in communities that we visit, they are explaining to us children who have been killed, what has happened to their families. There was shocking information in the Secretary General's report about what is being done to children in this conflict. There were reports of the Shabiha militias torturing children, of government forces using children as human shields as they enter towns. There was also reports of the children being recruited into the opposition armed forces. Things have only gotten worse."

Watch a video of Kieran Dwyer, chief spokesman of the U.N. Department of Peacekeeping Operations, speaking with CBS News foreign affairs analyst Pamela Falk on how the conflict in Syria is affecting the children caught in the middle of the violence:

Dwyer discussed the limits of operating in Syria: "The observer mission is not allowed to use its own air assets to travel around the country. This was a government of Syria decision; we have requested it but they have denied us the ability to use the helicopters."

Firepower is increasing, said Dwyer: "Observer teams have observed drones in Syria, we are not able to verify what use they are being put to.

"Certainly In the last week we have observed helicopters flying over cities such as Homs, and being used in military operations, we have seen shooting out of these helicopters into those cities. This is a relatively new development that is extremely concerning."