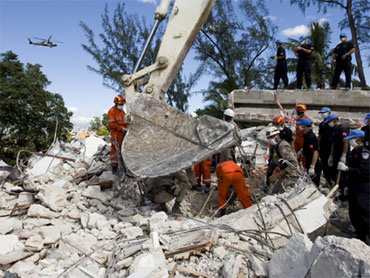 Rescue workers have saved more than 70 people from the rubble of Haiti's earthquake, an unusually high success rate in an otherwise extremely challenging relief operation, a U.N. spokeswoman said Sunday.

Many Haitians were still unable to obtain food and clean water Sunday, but the aid workers have made progress in getting food, water and supplies into the Caribbean country and have started distribution to people in the heavily damaged capital Port-au-Prince, said Elisabeth Byrs.

The search and rescue operation is a bright spot in the relief operation five days after the magnitude-7 quake, Byrs said, adding that she didn't have comparative rescue figures for similar U.N.-coordinated searches after earthquakes, but that officials were sure the current rate was high.

"There are still people living" in the collapsed buildings, Byrs told The Associated Press. "Hope continues."

People might live for six days in the rubble, and morale is good among the 1,739 rescue workers, she said. Some 43 teams from around the world with 161 sniffer dogs and high-tech equipment are already in place and more were on their way to join in the round-the-clock operation.

Deliveries of relief supplies to Haiti have started to improve as teams from different countries and organizations work around damage to Port-au-Prince's airport and bring in convoys from the neighboring Dominican Republic, Byrs said.

A critical concern Sunday was the rapidly diminishing supplies of fuel for vehicles, and the U.N. was looking for new sources, she said.

As of Saturday some 250 tons of relief goods, ranging from water to field hospitals, had arrived in Port-au-Prince and distribution to people on the ground was starting to improve slightly.

She said aid was coming through the Port-au-Prince airport, the seaport at Gonaives, Santo Domingo's airport and seaport in the Dominican Republic, as well as two small private airports in the neighboring country.

Experts are moving to clear damage from Port-au-Prince's seaport so that it can be used as well, Byrs said.