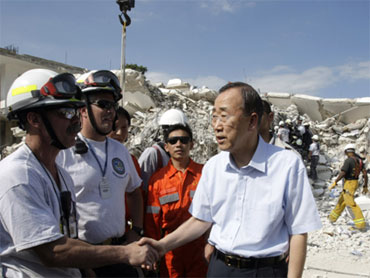 Secretary-General Ban Ki-moon made an emotional visit to the Haiti peacekeeping mission's devastated headquarters Sunday and delivered a message of hope to the country's earthquake victims, acknowledging that many of the survivors are growing desperate.

On a whirlwind trip to the Haitian capital, Port-au-Prince, Ban said he recognized "that many people are frustrated and they are losing their patience."

With an estimated 3 million to 3.5 million people in need of aid, Ban was asked whether it would be enough to avoid riots.

"I sincerely hope and appeal to Haitian people to be more patient," he said. "We do not want to even imagine that kind of situation."

Ban made a stop at the plaza in front of the severely damaged National Palace where thousands of Haitians were camped out and a group of men and boys were shouting that they needed food, water and work.

"I have seen and I have met many people on the streets in front of the presidential palace," he said. "They are appreciative of the help of the international community. From their faces and from conversations with them, I saw that they are committed. They are looking for a better future. ... I told them that I'm here to give them hope and to bring them a better future."

Ban said he has three priorities in Haiti: saving as many lives as possible, stepping up humanitarian assistance and ensuring the co-ordination of the huge amount of aid coming into the country.

"We should not waste even a single item, a dollar," he said.

The secretary-general's first stop was at the collapsed U.N. mission headquarters in the capital, Port-au-Prince, where rescuers worked feverishly to rescue Danish civil affairs officer Jens Christensen from the rubble of the five-story building. Staffers accompanying Ban wiped away tears as they viewed the destruction and mourned their dead and missing colleagues.

About 15 minutes after Ban left, emergency workers successfully pulled Christensen from the building. He was soon talking and smiling as he was given water, and was taken to a hospital.

Informed of the rescue later, Ban called it "a small miracle and ... a great sign of hope."

The secretary-general's 5½-hour trip ended on a heartbreaking note, however, with a military farewell to Haiti mission chief Hedi Annabi and his deputy, Luiz Carlos da Costa, whose bodies were found Saturday in the ruins of the U.N. building. Scores of other U.N. personnel are missing, including more than 30 from the U.N. headquarters.

The caskets of Annabi and da Costa were draped with the U.N.'s blue-and-white flag and carried onto Ban's awaiting jet by U.N. soldiers. Ban bowed before the caskets as the mournful Last Post was played and U.N. personnel clung to each other with tears in their eyes.

The Haiti earthquake, which has claimed as many as 100,000 victims, is "one of the most serious humanitarian crises in decades," Ban said. "The damage, destruction and loss of life are just overwhelming."