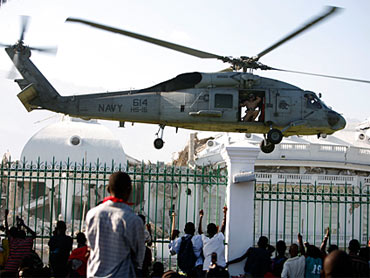 U.S. troops landed on the lawn of Haiti's shattered presidential palace to the cheers of quake victims on Tuesday, and the U.N. said it would throw more police and soldiers into the sluggish global effort to aid the devastated country.

The U.N. forces are aimed at quelling the outbursts of violence that have slowed distribution of supplies, leaving many Haitians still without help a week after the magnitude-7.0 quake killed an estimated 200,000 people.

Looters were rampaging through part of downtown Port-au-Prince even as the Security Council voted to add 2,000 troops to the 7,000 military peacekeepers already in the country as well as 1,500 more police to the 2,100-strong international force.

Haitians jammed the fence of the palace grounds to gawk and cheer as U.S. troops emerged from six Navy helicopters.

"We are happy that they are coming, because we have so many problems," said Fede Felissaint, a hairdresser.

Given the circumstances, he did not even mind the troops taking up positions at the presidential palace. "If they want, they can stay longer than in 1915," he said, a reference to the start of a 19-year U.S. military presence in Haiti — something U.S. officials have repeatedly insisted they have no intention of repeating.

A full week after the quake, the capital's port remains blocked and too much aid must flow through the city's lone, small airport. Tens of thousands of people sleep in the streets or under plastic sheets in makeshift camps. Relief workers say they fear visiting some parts of the city.

Just four blocks from U.S. troop landing at the palace, hundreds of looters fought over bolts of cloth and other goods with broken bottles and clubs.

"That is how it is. There is nothing we can do," said Haitian police officer Arina Bence, who was trying to keep civilians out of the looting zone for their own safety.

Police Chief Mario Andersol said he can muster only 2,000 officers in the capital, down from 4,500 before the quake, and they "are not trained to deal with this kind of situation."

European Commission analysts estimate the quake injured 250,000 and made 1.5 million homeless, and many are exasperated by the delays in getting aid.

"I simply don't understand what is taking the foreigners so long," said Raymond Saintfort, a pharmacist who brought two suitcases of aspirin and antiseptics to survivors in the ruins of a nursing home.

Aid workers have distributed more than 250,000 daily food rations, with about half coming from the U.S. military, according to the World Food Program. But that is still far short of the need, and the U.N. agency managed to feed only half the 100,000 people it planned to reach on Monday. It said security forces were not available to escort its trucks and some military staff were injured while retrieving food from a badly damaged warehouse.

U.S. military efforts to speed aid through Port-au-Prince's airport appeared to be paying off after days of complaints by frustrated aid agencies: Air Force Gen. Douglas Fraser, head of U.S. Southern Command, the airport that handled just 30 fights a day before it was damaged in the quake is now handling 180 a day.

"We're doing everything in our power to speed aid to Haiti as fast as humanly possible," he said.

But the international aid group Doctors Without Borders/Médecins Sans Frontières (MSF) complained that U.S. controllers have turned away a planeload of medical equipment three times since Sunday despite assurances it could land.

"We have had five patients in Martissant health center die for lack of the medical supplies that this plane was carrying," said Loris de Filippi, emergency coordinator the group's hospital in Cite Soleil.

The group said five other of its planes have been able to land.

The Pentagon, meanwhile, said it is preparing two other airfields for aid flights, one in the Haitian town of Jacmel and another in the Dominican Republic.

International rescue teams pulled two Haitian women from a collapsed university building, using machinery to cut away debris and allow rescuers to pull them out on stretchers. A sister of one of the survivors shouted praises to God when the women emerged.

In the city's Bourdon area, French, Dominican and Panamanian rescuers using high-tech detection equipment said they heard heartbeats underneath the rubble of a bank building. The husband of a missing woman watched from a crowd of onlookers.

"I'm going to be here until I find my wife; I'll keep it up until I find her, dead or alive," said Witchar Longfosse.

In New York, the U.N.'s most powerful body voted unanimously to bolster the international peacekeeping corps already in Haiti.

The Pentagon announced that the 22nd Marine Expeditionary Unit from Camp Lejeune, North Carolina, had established a beachhead west of Port-au-Prince and it expected 800 of the 2,200 Marines in the unit to move ashore Tuesday. U.S. troop strength is rising to about 11,000, part onshore and part on ship.

Canada also has about 2,000 soldiers, sailors and air crew, including two warships, deploying to the towns of Jacmel and Leogane, southwest of the capital, and Foreign Affairs Minister Lawrence Cannon said Canada is ready to send more.

Italy, Spain and Venezuela say they, too, are sending naval ships to help.

U.S. Defense Secretary Robert Gates said Monday the U.S. troops plan to leave policing to the United Nations force, though he said they can defend themselves and innocent Haitians or foreigners if lawlessness boils over.

Still, some quickly found themselves doing a little policing: Troops of the 82nd Airborne stood guard outside the General Hospital because the crowd had grown so large that it was hindering the work of doctors trying to save lives.

Some neighborhoods are creating their own security forces, forming night brigades and machete-armed mobs to fight bandits.

"We never count on the government here, never," said 29-year-old Tatony Vieux in a hillside district where people used cars to block access to their street.

In the sprawling Cite Soleil slum, gangsters are reassuming control after escaping from the city's notorious main penitentiary and police urge citizens to take justice into their own hands.

"If you don't kill the criminals, they will all come back," a Haitian police officer shouted over a loudspeaker.

Elsewhere, overwhelmed surgeons appealed for anesthetics, scalpels, and saws for cutting off crushed limbs. Former U.S. President Bill Clinton, visiting one hospital, reported its staff had to use vodka to sterilize equipment. "It's astonishing what the Haitians have been able to accomplish," he said.

Thousands are streaming out of Port-au-Prince, crowding aboard buses headed toward countryside villages. Charlemagne Ulrick planned to stay behind after putting his three children on a truck for an all-day journey to Haiti's northwestern peninsula.

"They have to go and save themselves," said Ulrick, a dentist. "I don't know when they're coming back."

U.S. and Haitian officials warned Haitians against trying to reach the United States by boat. Haiti's ambassador in Washington, Raymond Joseph, recorded a message in Creole to his countrymen, urging them not to leave.

"If you think you will reach the U.S. and all the doors will be wide open to you, that's not at all the case," Joseph said, according to a transcript on America.gov, a State Department Web site. "And they will intercept you right on the water and send you back home where you came from."