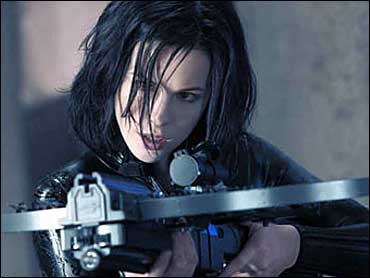 "Hoodwinked," the animated update of the Little Red Riding Hood story, fell to second place with $11 million in ticket sales, while inspirational films "Glory Road" and "Last Holiday" ranked third and fourth, taking in $9.1 million each.

The animated family friendly film "The Chronicles of Narnia: The Lion, the Witch and the Wardrobe" and the horror flick "Hostel" also retained spots in the weekend top 10.

The film, which follows the 20-year forbidden romance between two rugged ranch hands, won four Golden Globes, including best motion picture in the drama category and best director. It earned $7.8 million, an increase of 35 percent over the previous weekend.

"The Golden Globes gave more validation and importance to the film, and the box office shows it," said Jack Foley, president of theatrical distribution for Focus Features. "It's created a whole new level of momentum."

The Johnny Cash biopic "Walk the Line," also gained newfound spunk. The film didn't climb into the top 10, but its weekend earnings jumped 77 percent after Golden Globe wins for stars Joaquin Phoenix and Reese Witherspoon. The film also won the trophy for best motion picture in the musical or comedy category.

"I've never seen a boost of this magnitude," said Chris Aronson of 20th Century Fox. "It has to be Golden Globe-oriented."

"The Golden Globes are now a force to be reckoned with in terms of the box office bump they provide," Dergarabedian said. "We've never really seen a Globes bump like this."

Estimated ticket sales for Friday through Sunday at U.S. and Canadian theaters, according to Exhibitor Relations Co. Inc. Final figures will be released Monday: