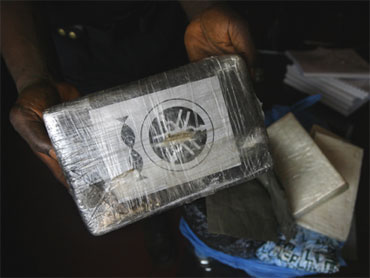 (AP Photo/Jerome Delay)
An "unholy alliance" has emerged between Islamic extremists and guerrilla fighters in Colombia, who are smuggling cocaine via Africa to Europe, according to the U.S. Drug Enforcement Administration.

Reuters reports that, due to growing difficulty is shipping cocaine from South America directly to the U.S. and Europe, drug traffickers are now transiting their goods through Africa, with the help of al Qaeda and other groups with links to terrorism.

(Left: Bags of cocaine confiscated in the West African Republic of Guinea.)

Jay Bergman, DEA director for the Andean region of South America, told Reuters' Hugh Bronstein that the Revolutionary Armed Forces of Colombia (or FARC) is using ties to al Qaeda to expand its trafficking of cocaine through West Africa. By providing security for the operation, the Islamic militants are able to acquire funds.

While FARC are using African connection to export drugs, Bergman told Reuters that Mexico drug producers are using the same route to import chemicals needed for their methamphetamine operations.

Increasing interdiction on normal routes is forcing narco-traffickers to find new ways to move their product.

It is also creating more problems for African nations such as Guinea Bissau. Traffickers have been blamed for .