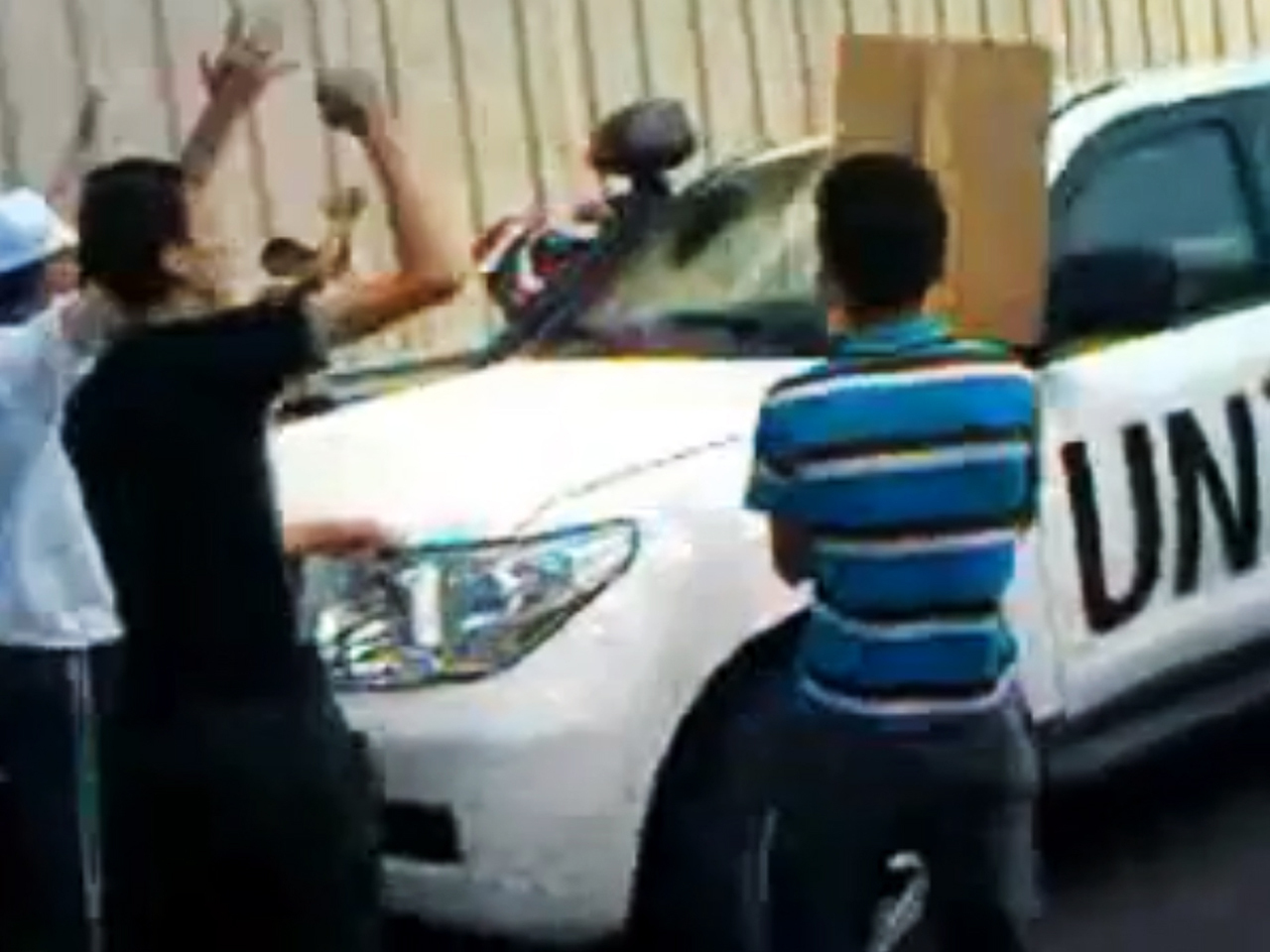 (CBS/AP) DAMASCUS, Syria - A team of United Nations observers entered the Syrian town of Haffa Thursday after government troops overran the area near the Mediterranean coast, seizing the territory back from rebels after battles that raged for eight days.

The visit came hours after a suicide bomber detonated his van packed with explosives in a Damascus suburb, wounding 14 people and damaging one of Shiite Islam's holiest shrines, according to Syria's state-run news agency and witnesses.

Sausan Ghosheh, a spokeswoman for the observers, confirmed monitors entered Haffa Thursday, and witnesses traveling with the team described scenes of heavy fighting and destruction, including burned-out state buildings and a corpse in a deserted street. In a statement, Ghosheh said:

"The town appeared deserted. Most Government institutions, including the post office, were set on fire from inside. Archives were burnt, stores were looted and set on fire, residential homes appeared rummaged and the doors were open. The Baath Party Headquarters in the town was shelled and appeared to be the site of heavy fighting. Remnant of heavy weapons and a range of caliber arms were found in the town. Cars, both civilian and security were also set on fire and damaged. A strong stench of dead bodies was in the air and there appeared to be pockets in the town were fighting is still ongoing. The number of casualties is still unclear."

Special Section: The Arab Spring
U.S. points finger at Russia on Syria conflict
Is Syria in an "official" civil war?

The observers had been trying to get into the town in the coastal Latakia province for a week after fears were raised that a brutal assault by regime forces was under way there.

The mountain enclave has been the site of intense clashes between government forces and hundreds of rebels holed up inside.

On Tuesday, an angry crowd hurled rocks and sticks at the U.N. mission's vehicles near Haffa, forcing them to turn back.

Authorities then said Wednesday they had "cleansed" the area of "armed terrorist groups" and urged U.N. observers to immediately head there "to check what the terrorist groups have done."

The observers stopped by torched buildings belonging to the ruling Baath party's local branch as well as the burned courthouse, post office and other government institutions, according to the witnesses.

U.N. observers have reported a steep rise in violence and a dangerous shift in tactics by both sides in Syria in recent weeks.

It was not immediately clear whether Thursday's bomber in the Sayyida Zainab suburb of Damascus intended to target the Shiite shrine or a police station that was only 15 yards away.

As the violence grows more chaotic, it is difficult to assign blame for much of the bloodshed. Western officials say there is little doubt that Islamist extremists, some associated with al Qaeda, have made inroads in Syria as instability has spread.

Witnesses said the bomber detonated an explosives-packed van that he drove into a parking lot about 50 yards from the shrine despite efforts by guards to stop him. The blast shattered the shrine's windows, knocked down chandeliers and electric ceiling fans and cracked some of its mosaic walls.

Parts from the car detonated by the suicide bomber were found inside the shrine's sprawling complex.

Tens of thousands of Shiite pilgrims from around the world converge on Sayyida Zainab suburb every year to visit the golden-domed complex with the same name, which is believed to house the remains of the granddaughter of Islam's Prophet Muhammad.

Sheik Sayyed Mojtaba al-Husseini, the representative of Iran's supreme leader, Ayatollah Ali Khamenei, in Syria, accused "terrorists" of the bombing, echoing the government's line that the rebels are foreign agents. Iran is one of Syria's remaining allies.

"They want to turn the people against the government. This is not a revolution, it is a fake reality imported by some Arab leaders who are agents of the West," al-Husseini said.

The site is popular with Iranian and other Shiite pilgrims and tourists.

SANA news agency said 14 people were wounded by the explosion. Six tourist buses and more than 30 cars and a small police bus also were damaged.

"I worked for 10 years before I was able to buy this car," said Amin Daoud, a 35-year-old laborer at the scene of the explosion. "I parked it here last night and now it's totally destroyed."

Walid Aeda, a worker who fled Syria's battered central Homs region and was staying in a hotel near the shrine, said the explosion shattered the glass in his room, wounding his wife who had to get 18 stitches in her head.

"We fled the violence in Homs to come to Damascus and now this," he said.

Troops continued to pound rebel-controlled areas in Homs Thursday, while rebels reportedly clashed with government forces in several other parts of the country.

The Britain-based Syrian Observatory for Human Rights said three civilians were killed overnight in clashes at the entrances of the Jouret el-Shayyah neighborhood in Homs city. Another died in the rebel-held town of Rastan north of Homs, which has been under intense fire from regime forces for days.

The Observatory said troops were using helicopters and mortars to shell Rastan, adding that many rebels were wounded Thursday.

Activists say some 14,000 people have been killed since the uprising began in March 2011.