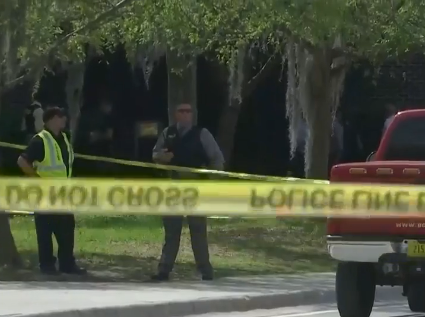 ORLANDO, Fla. -- A building at the University of Central Florida in Orlando was evacuated Wednesday after campus police say someone wearing a LeBron James Miami Heat basketball jersey stood up in a classroom and threw powder in the air. University police said in a statement on Twitter that the Business Administration building was evacuated "out of an abundance of caution" during an investigation.

Police said later Wednesday the powder in question "is a match for powdered baby formula." An all-clear was issued.

The suspect is not believed to be a student in the class where the powder was thrown, according to authorities.

In a video posted on Twitter, Police Chief Richard Beary said it appeared to be a stunt but police had to treat it as an emergency just to be sure. Students were asked to avoid the area.

James, who now plays for the Cleveland Cavaliers, sometimes tosses chalk in the air in a pregame ritual.

A student said the man who threw the powder yelled, "I'm taking my talents elsewhere. I'm going to Miami," as he threw it, CBS Orlando affiliate WKMG reports.

UCF police said late Wednesday morning they were searching for a man described as 6 feet, 2 inches tall, who was wearing a red-and-white LeBron James Miami Heat jersey. Police said they're also seeking a second person who had two backpacks.

"We had an individual throw powder in one of the classrooms. We think it was going to be some type of stunt, like a LeBron James stunt, but unfortunately with the current threat situation the way it is our fire partners said we needed to treat it as a hazmat situation," UCF Police Chief Richard Beary said, WKMG reported.