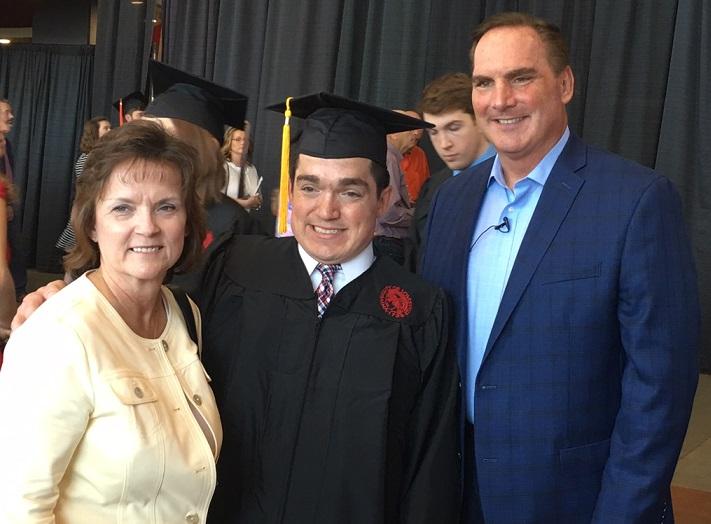 On Saturday, 29-year-old Ryan Dant graduated from his dream school, the University of Louisville. And for him, the relatively ordinary act of walking across the stage in a cap and gown was nothing short of a miracle.

Ryan was never supposed to graduate from college. He wasn't supposed to be able to walk across the stage to receive his diploma, or work as an equipment manager for the school's football team.

He wasn't even supposed to live past the age of 10.

When he was 3 years old, Ryan was diagnosed with a rare genetic disease called Mucopolysaccharidosis 1, or MPS 1. Basically, his body doesn't produce an essential enzyme that breaks down certain proteins, causing a buildup that affects multiple systems. Symptoms include stiffening of limbs, organ damage, stunted growth, trouble breathing, and deterioration of a person's mental abilities. Pain gradually increases as conditions worsen.

There wasn't much research on the disease when Ryan as diagnosed in 1991, because so few people had it. The average lifespan of a child with MPS 1 was just 10 years, and no treatment or cure existed. Ryan's parents, Jeanne and Mark, were told there was little more they could do than wait for their son — who dreamed of going to the University of Louisville like his mom, and loved the Texas Rangers — to die.

But they refused to believe their happy, active son could soon be in a wheelchair, and possibly not live beyond his adolescent years. They decided to try to find a cure for their boy, but they knew time was not on their side.

Mark Dant, who was a police officer in Carrollton, Texas, got involved in the National MPS Society, going to conferences and meeting other affected parents and children. He began searching for scientists who were working on treatments, and started a non-profit called the Ryan Foundation to raise research funds. Their first fundraiser, a bake sale, made just $342. But within a few years, the foundation was hosting $100,000 golf tournaments.

Meanwhile, Ryan was in dire need of a solution. By the age of 7, he could barely move his hands and breathing was extremely difficult.

In 1995, Dant connected with Emil Kakkis, a researcher working for UCLA who was working to create a synthetic version of the enzyme kids with MPS 1 were missing. Kakkis needed funding, and Dant was eager to provide it through the foundation. Within three years, Kakkis was granted FDA approval for a clinical trial. Ryan was one of ten children chosen to participate, and in February 1998 the family left Texas for California.

Ryan received the first treatment of what is now called Aldurazyme two months before his 10th birthday. His muscles began uncurling, he started growing again, and he gained weight. By the time he was 13, he was playing baseball again and — aside from his weekly four-hour enzyme treatments at Children's Medical Center Dallas — living a relatively normal teenage life.

"It feels like I can do everything that I ever wanted to, like ride my bike every day or play baseball, basketball, you name it, I can do it," Ryan said to "60 Minutes."

But towards the end of high school and into his years at community college, he began to experience severe memory loss and trouble focusing. He would study for hours, only to forget everything he'd read. The enzyme therapy could not pass the membrane barrier around his brain, meaning it could not prevent the mental deterioration caused by his disease. His annual testing at the University of Minnesota confirmed the cognitive decline, and his dreams of going to University of Louisville began to fade.

In 2011, the Dants learned of new trial at UCLA testing whether injecting the enzyme via spinal tap could help it reach the brain. Ryan was rejected when a dye test was unable to make it through his narrow spine, which was clogged with protein waste.

Ryan took to Facebook to express his frustration, where a nurse named Sarah McNeil from the early days of his Aldurazyme treatments in Dallas saw his post. McNeil was working with Dr. Elizabeth Maher, a neurologist with the O'Donnell Brain Institute at UT Southwestern Medical Center, who treated brain tumors through spinal taps. Dr. Maher hoped that repeated injections into his spinal fluid would eventually break through the buildup.

She was right. Shortly after the injections, which began in 2012, Ryan began regaining memorization skills, reading, and his cognitive scores improved. He was able to finish his associate's degree at Brookhaven Community College in Texas in December of 2013.

"We had only hoped to stop the neurocognitive decline, but as the enzyme worked to break down the proteins, Ryan got better. This stunning result is giving us a roadmap to how we can think about other diseases in the brain. Ryan's journey will impact the lives of countless other children," Dr. Maher said in a statement.

Finally, he was able to take a full course load and pursue a degree in sports administration. He was admitted to the University of Louisville and secured a scholarship as a student equipment manager for the football team.

And on Saturday, he walked across the stage and received his diploma, a moment nearly three decades in the making. His parents, girlfriend, and Dr. Kakkis all attended.

"It was a surreal moment, because we never thought I would come to that day and walk across a stage and get my diploma," Ryan told CBS News. "It's amazing to see the parents that I have, because the doctors basically said 'Enjoy the time you have with your son.' But they didn't take no for an answer."

Now that he's achieved this dream, Ryan hopes to move on to the next — working as an executive assistant in the MLB or NFL.

"For many, many years, I wouldn't allow myself to visualize Ryan in a cap and gown and enjoying what it might feel like to be a college graduate, because it wasn't going to happen," Mark Dant told CNN. "But Ryan, and so many others, made it possible by not giving up."

Thanks to the work of the Dant family, Kakkis, and all of those who supported them along the way, Aldurazyme is currently the only FDA approved drug for MPS 1. The drug has dramatically improved the life expectancy for those diagnosed with the disease. The Ryan Foundation continues to raise money to support research of the condition and other rare diseases.