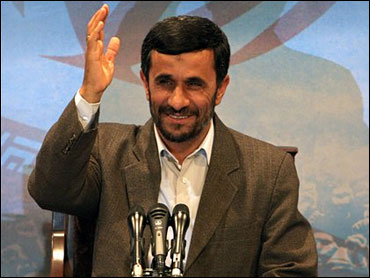 Columbia University said it does not plan to call off a speech by Iranian President Mahmoud Ahmadinejad despite pressure from critics including the City Council speaker, who said the Ivy League school was providing a forum for "hate-mongering vitriol."

The Iranian president is traveling to New York to address the United Nations' General Assembly. He was scheduled to appear Monday at a question-and-answer session with Columbia faculty and students, as part of the school's World Leaders Forum.

City Council speaker Christine Quinn called Thursday for the university to rescind the invitation, saying "the idea of Ahmadinejad as an honored guest anywhere in our city is offensive to all New Yorkers." She said he was coming to the city "for one reason - to spread his hate-mongering vitriol on the world stage."

Ahmadinejad has called the Holocaust "a myth" and called for Israel to be destroyed.

His planned appearance at Columbia also was condemned by Jewish groups including the Jewish Defense Organization, which described Ahmadinejad as "the Hitler of Iran."

But Columbia spokesman Robert Hornsby said Thursday that there was no plan to cancel the appearance, though the university dropped plans for an Ahmadinejad speech last year due to security and logistical problems. The decision came after a Jewish activist group blasted the university over the invitation.

Columbia President Lee Bollinger, in announcing Ahmadinejad's upcoming appearance, described the event as part of "Columbia's long-standing tradition of serving as a major forum for robust debate." He said the Iranian president had agreed to answer questions on Israel and the Holocaust.

Ahmadinejad's trip to New York ignited debate earlier this week over his rejected request to lay a wreath at ground zero. The State Department calls Iran a state sponsor of terror, and politicians and families of Sept. 11 victims were outraged that its president might visit the site of the 2001 terror attacks.

Police rejected Ahmadinejad's request, citing construction and security concerns. In an in interview to air Sunday on 60 Minutes Ahmadinejad indicated he would not press the issue but expressed disbelief that the visit would offend Americans.

"Why should it be insulting?" Ahmadinejad asked 60 Minutes' Scott Pelley.

"Usually you go to these sites to pay your respects. And also to perhaps air your views about the root causes of such incidents," Ahmadinejad said. "I think that when I do that, I will be paying … my respect to the American nation."