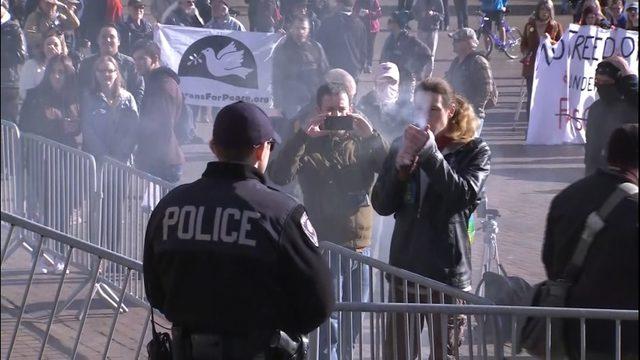 SEATTLE -- Five people were arrested and several fights broke out Saturday at a "freedom rally" hosted by the College Republicans group University of Washington. The rally was met by a large group of counter-protesters, CBS affiliate KIRO-TV reports.

College Republicans invited the Vancouver, Washington, based right-wing group Patriot Prayer to speak in Red Square for a "freedom rally."

No officers were injured. Seattle police said they assisted in providing security.

Before the fight broke out, officers kept the two opposing side apart.

KIRO-TV reports video from the event showed a protester lighting an American flag on fire while protesters chanted "no justice, no peace."

University officials were worried about the potential for violence the rally could bring, and the president had warned students to avoid the square. UW officials said Friday in a statement that they were "taking precautions to ensure the Patriot Prayer event unfolds as peacefully as possible."

UW tweeted Saturday that as a university, they have "free speech obligations" and the threat to safety would be greater if the event was canceled.

UW was blocked from charging the school's Republicans group a $17,000 security fee ahead of a "freedom rally" Saturday, a federal judge ruled Friday.