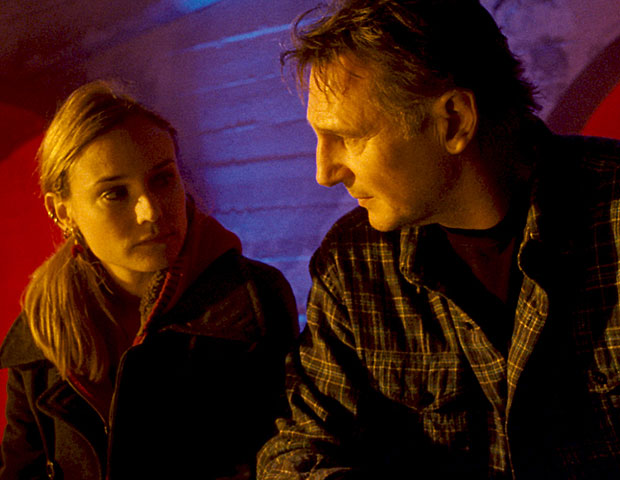 (CBS) Conjuring up shades of the made-for-him role he played as a CIA agent in "Taken", Liam Neeson once again nails it in a psychological thriller with a similar kind of adrenalin rush.

In "Unknown," Neeson plays Dr. Martin Harris, a botanist, who arrives with his wife, Liz, (January Jones) at a ritzy hotel in Berlin to attend an important biotechnology summit. Upon reaching the hotel, Harris jumps right back into a cab outside the hotel, while his wife tries to check in at the hotel reception desk. Harris, clearly in a hurry, asks the cab driver, Gina (Diane Kruger), to step on it.

She does, but in the bargain gets into a terrible accident. She manages to save her life and that of her passenger, but then mysteriously disappears, leaving Harris on his way to the hospital.

When he wakes up from a coma four days later, he slowly realizes his life has been take from him. Amnesia, caused by the accident, forces him to question the very nature of who he is, as he tries to claim back his life.

Leaving the hospital in search of his wife, he soon discovers there is a plot against him. He realizes someone else (Aiden Quinn) has assumed his identity, his career and his wife. After a bizarre set of twists and turns, Harris is compelled to find the one person- Gina- who can help him solve the mystery that has him questioning his sanity.

Director Jaume Collet-Serra ("Orphan") does a masterful job in bringing to life a perfectly concocted plot from a screenplay by Oliver Butcher and Stephen Cornwell ,based on the novel by Didier van Cauwelaert. There is a sense of complete legitimacy in the storyline that has viewers believing that what they see transpiring is completely plausible. The scenario in which Harris finds himself could happen to anyone and that is what will keep audiences transfixed .

Academy award winner Liam Neeson outdoes himself as a man plagued by the unknown, as a man struggling to come to grips with what he believes to be true, but unable to prove it. He does an admirable job drawing the audience into his psyche, bringing them along with him as he tries desperately to decipher what is going on.

Jones, too, turns in a fine performance as the beautiful, yet enigmatic wife. Her character is reminiscent of the femmes fatale in spy films from the '50s. Diane Kruger, too, is pitch perfect as the street-smart Bosnian illegal immigrant caught up in a mystery she wants no part of, fearing she will be deported .

Like "Taken", full of nonstop twists and turns that will keep you guessing until the very end, "Unknown" is an intense thriller throws you a curve ball you never saw coming.