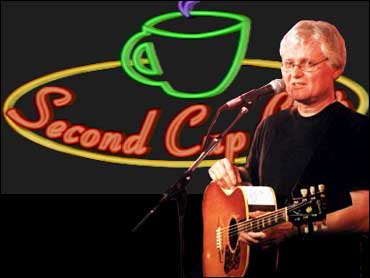 "The Trouble With Humans" is the second collaboration between veteran singer/songwriter Chip Taylor, and young fiddler/singer Carrie Rodriguez. Their last album "Let's Leave This Town" was a sleeper hit in 2002, reaching No. 2 on the Americana chart and scoring three stars in Rolling Stone.

The two stop by The Saturday Early Show and are the latest to grace the Second Cup Café's stage with performances from their album.

During the '60s and '70s, Taylor was one of America's most successful songwriters, penning tunes that became hits for artists as diverse as Juice Newton ("Angel of the Morning"), Dean Martin and the Troggs ("Wild Thing").

As a junior in high school, Taylor and his band, The Town and Country Brothers, was the first white act signed to King Records. Soon after, as a solo artist, Taylor had his first hit single, "Me As I Am."

After leaving the music business for 15 years to pursue a career as a professional gambler, Taylor (who's brother happens to be Jon Voight) returned to writing and performing in the mid-'90s, and now tours the Americana circuit as a duo with the Berklee-trained Rodriguez.

Rodriguez is the daughter of noted Texas singer-songwriter David Rodriguez and visual artist Katy Nail. A concertmaster with the Austin Youth Symphony during her teen years, Rodriguez also appeared as a soloist with the Austin Civic Orchestra.

Taylor and Rodriguez met in 2001 at a music festival in Austin. Soon after, they started touring in the U.S. and then Europe. And with a little encouragement from Taylor, Rodriguez, who is an untrained singer, started vocalizing for the audience, too.

Now, the duo, with different musical experience and styles, are musical equals with a lot to sing about.