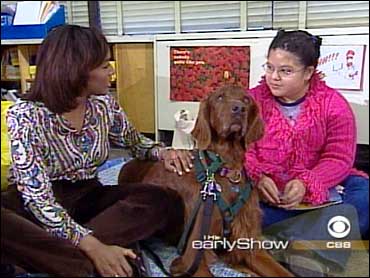 If you stop by your local elementary school and spot a dog in the classroom, you won't be seeing things.

reports
in the latest "Study Hall" installment, hundreds of schools and libraries nationwide are turning to man's best friend to help teach kids to read.

And, Turner points out, the task can be daunting, since 40 percent of United States fourth-graders read below grade level.

One school making use of Reading Education Assistance Dogs is the Washington Grove Elementary School in Gaithersburg, Md.

Ross, an Irish setter owned by Barbara Murgo, sits quietly and patiently as kids read to him.

And Ross seems to look forward to it.

The thinking, explains Turner, is that reading out loud helps reading comprehension. And reading to a dog is apparently less scary than reading to a person.

"It's totally non-threatening because they trust the dog," Murgo says. "And the dog is not gonna to make fun of them. And the dog is just going to listen to them and not judge them."

While there are no formal studies that prove the program works, research does show that just being around a dog reduces anxiety. And less anxiety promotes better learning, Turner says.

Though the kids Turner spoke with endorsed the program, Washington Grove principal Kathy Brake admits she had her doubts at first.

But Brake also knew that, "If we don't have children reading on grade-level by the end of the second grade, we begin to lose them."

In fact, according to the National Assessment of Education Progress, kids who don't read for fun have much lower scores than kids who do.

Turner adds that the students seem to think Ross is actually listening to them as they read to him.

One youngster told Turner, "He sits and, when I show him the book, he looks at it."

"The biggest thing is getting them hooked on reading. And what better motivator than a dog? That just draws them right in."

Remarks Murgo, Ross's owner, "It's amazing it wasn't thought of sooner because it works so well."

The program has more than 750 teams nationwide that visit both schools and libraries. And there's no charge for the service.

Turner says the dogs are screened, though they're already therapy dogs, so they already know how to deal with people. They just have to be willing to lie so still for so long.