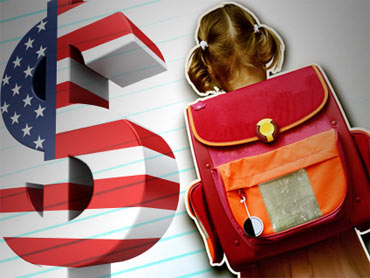 (CBS)
Getting kids back to school with the clothes and supplies they need can strain the family budget. That's why the Governor of New York decided to use federal stimulus funds for a back-to-school program. Needy families got a one-time payment of $200 dollars per child to buy school supplies. It adds up to $140 million of your tax dollars.

"Definitely sneakers, try to save a little bit for a haircut, a couple of pairs of pants, some shirts, get the girls a few skirts," Hendricks says.

While few argued with the concept of helping low-income families, nobody anticipated the chaos that would come next.

On August 11th, the state of New York deposited the $140 million in stimulus money into the individual food stamp and welfare accounts of people on public assistance. Some saw their balance shoot up by a thousand dollars all at once. The idea was they would use their regular welfare benefits card, which acts like a debit card, to buy the school supplies. There was just one problem. The letter from the state telling them what the money was for didn't arrive until days later. By then, it was too late. See the Letter Sent to Recipients (PDF).

"No one questions the intention of this particular program. However there is an extraordinary distance between the good intention of the program and the implementation of the program," Monroe County's Commissioner of Health Services Kelly Reed said on Wednesday's edition of "Washington Unplugged," which first reported the story. (You can watch the show at left.)

County Executive Maggie Brooks says social workers were flooded with calls from merchants who were afraid fraud was being committed.

"We had different retailers calling us and saying people were coming in with their benefit transaction card, and they are purchasing flat screen TV's, iPods and video gaming systems," Brooks told CBS News. Brooks doesn't blame the recipients - she blames the state for not ensuring the funds were spent for school.

Businessman Josh Babin says the day stimulus money went into the welfare accounts, business at his Rochester cell phone store doubled. And he doesn't sell school supplies. "Most of them came in, picked up most of their accessories, most of their products."

Welfare recipients were also free to withdraw the money as cash. That led to an unexpected run on ATM's across the state. Brenda Smith, manager of a Wilson Farms store in Monroe County, said most of her increase in sales when the stimulus funds were disbursed were not in school supplies, but in "pre-pay cell or credit cards." She said her store's ATM was wiped empty.

Managers of four Tops Markets stores in Rochester had similar stories. On West Avenue, the store's three ATM's were all depleted by noon on August 11th. "Large increase in volume of customers but minimal spoke in sales which were not in school supplies but rather candy racks at the register," stated investigative notes obtained by CBS News. So many welfare customers were seeking cash back; the stores implemented a $50.00 cash back limit on-the-spot. At the East Ridge Road location, the ATM ran out of money on August 11 as well. "Numerous clients came in and purchase minimal items to withdraw the $50.00 limit and then returned to other cashiers in the store in order to retrieve all the money out of their account," reads investigative notes. And on Upper Falls Blvd., the Tops Market reported "500 more customers" but "$4,000 less in sales" than usual. Also, ATM's containing $60,000 were entirely depleted.

On "Unplugged" Reed said one recipient "had $1000 dollars on their card and jumped over a period of a few minutes over eighteen lines in a Tops store buying something for forty nine cents for two dollars for fifty cents and getting fifty dollars back in cash," each time.

ATM's were also wiped out in hours at many Wegman's stores statewide and the owner of a Sunoco station described "scenes of panic" at her store, with public assistance customers flooding her ATM machine. Some of them, she says, immediately used the cash to buy cigarettes and beer.

Monroe County investigators sampled the accounts of more than 70 drug and alcohol rehabilitation clients and found more than half of them withdrew their back-to-stimulus funds entirely in cash.

New York Congressman Eric Massa (D-NY) supports the stimulus bill, but said this program is flawed. "It's a matter of accountability," Massa said. "Ensuring what's happening with the funding. You and I both know where there's crevices, the water will go through those crevices." 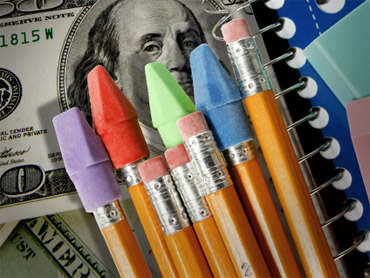 (CBS)
New York State officials defend the stimulus program saying no matter what welfare recipients purchased with the taxpayer funds, it served to stimulate the economy. State spokesman for the program, Kristen Proud said it stimulated the economy. Supporters accuse critics of making unfair stereotypes about welfare recipients. "We have as many examples of families using the dollars for school clothes, school uniforms, school supplies," Proud said when asked about reports of luxury items being purchased with the back-to-school stimulus funds.

In Rochester, the Rev. Marlowe V.N. Washington, Pastor of the Baber African Methodist Episcopal Church, contacted CBS News to say that hundreds of grateful local residents have been helped by the back-to-school funds, and that it's unfair for anyone to assume they didn't spend the money on school supplies. "That is offensive, attacking and mean spirited," Washington told us. "People need to hear how stimulus funds have benefited American families and not hurt them."

Because debit cards don't list what was bought, state officials say they'll never know how much of the $140 million actually went for school supplies. Those who bought luxury items didn't break any laws, because there were no strings attached to the money. Little consolation to taxpayers who were promised that they'd know how every dime of stimulus funds was spent.