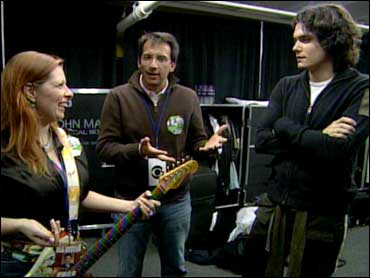 You've probably heard the expression "party like a rock star."

Well, Miami bride-to-be Adrienne Denaro got to do just that along with Dave Price, thanks to Denaro's "All-Access" pass to one of eight whirlwind weekend getaways being given away by The Early Show.

Price surprised Denaro with her pass on Friday, then they went in style, and then some, to the Canadian city of Vancouver, British Columbia, where they got to meet John Mayer and Sheryl Crow, not to mention attend a concert the stars gave.

First, there was a ride in a Bentley to the airport, where they boarded a luxury private jet, a Bombardier Challenger 604 courtesy of Flexjet.

The jet's cabin featured leather seats that swivel and recline, along with wood paneling and crystal glassware.

Food went way beyond peanuts: Banana bread, muffins, croissants, fruit and champagne were on the menu.

Denaro kidded with Price that, if she were to write her fiancé back home a postcard, it would say "something like, 'I miss you, I wish I was home with you,' and I'd be totally lying!"

On the ground in Vancouver, it was off to the tony Pan Pacific Hotel, then to the site of the concert.

Denaro's "All-Access" pass got her to places she never would have imagined.

She got to hear Mayer's pre-show sound check, and she said, "I'm a very lucky girl. I'm used to being up in the 'nosebleeds,' squinting, using binoculars."

Denaro then met Mayer himself, getting to visit his dressing room and don his guitar!

But that wasn't all.

She got to meet Crow on her tour bus.

When it came time for the actual concert, even front row seats couldn't match where Denaro and Price got to sit: in the pit directly in front of the stage.

The trip was arranged with the help of the Canadian Tourism Commission.

What's your fantasy adventure?
Tell us and if you can be in one of the cities Dave is visiting across the country Fridays through Oct. 27, you could be whisked away on an "All-Access" weekend, too. On Friday, Sept. 29, join Dave in Raleigh, N.C.

The multiple choice question on Tuesday, Sept. 26 was:

In John Mayer's dressing room, Denaro:
a) Tried on his jacket
b) Ate his candy
c) Wore his guitar