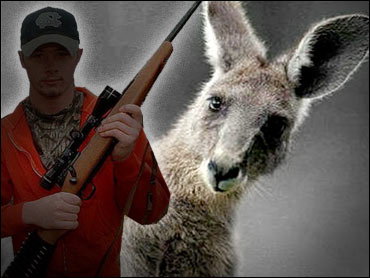 Shooters gathered Monday to begin killing up to 15,000 kangaroos on grasslands within an army base in southern Australia, after the animals' population surged and they were beginning to starve.

The Defense Department hired nine shooters to reduce the kangaroo population on the 110,000-acre Puckapunayl army base in the southern state of Victoria, department spokesman Brian Humphreys said.

"Shooting will start in another day or so," he said.

Inspectors from the Royal Society for the Prevention of Cruelty to Animals will have access to the base to make sure the cull is conducted humanely. The animals will be shot in the head, and their carcasses buried in mass graves on the base.

The killing will take an estimated three months and cost about $385,000.

The base's kangaroo population exploded to more than 80,000 — from about 45,000 in 1999 — after the removal of sheep flocks from the area allowed grass to grow unchecked, providing fodder for hordes of kangaroos.

Ecologists recommended the cull after hundreds of kangaroos began starving and tangling themselves in wire fences in a bid to find new pastures.

Animal welfare activists have said they were prepared to stand between shooters and kangaroos if they deem that the animals are being unnecessarily killed.

Spokeswoman Rheya Linden of the group Animal Active said that only sick kangaroos should be shot, while healthy ones should be fed and released.

Several protesters were evicted from the base Sunday when they broke through a fence and attempted to feed bales of hay to some of the kangaroos.

There are over 60 different species of kangaroo in Australia. While it is impossible to determine the exact number in Australia, the population of the four most common species is thought to be more than 50 million.