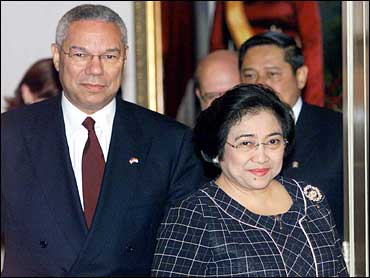 Despite human rights concerns, Secretary of State Colin Powell promised Indonesia $50 million to help its security forces fight terrorism, but stressed that full military ties were still some ways off.

Powell praised Indonesia's level of cooperation in fighting terrorism and said the world's most populous Muslim nation had made a dramatic return to democracy.

"I am pleased that as a result of the leadership shown by President Megawati (Sukarnoputri), we are able now to start down a road towards greater military-to-military cooperation," Powell told reporters.

While Powell said he was confident President Megawati Sukarnoputri and the security forces could deal with terrorist threats, he added Washington wanted to boost their capabilities.

Most of the $50 million to be spent over several years will be used by police, including $12 million to set up a special counterterrorism unit. The United States largely cut military ties following violence in East Timor in 1999 which accompanied the territory's vote to break from Jakarta's often brutal rule.

Addressing concerns about rights violations by Indonesia's armed forces, Powell said: "The American Congress is watching carefully and is expecting action to be taken with respect to past abuses that might have occurred."

U.S.-sponsored anti-terrorism programs for civilians and police would enhance human rights in the world's fourth most populous country, he said.

"I'm very pleased with the level of our cooperation on a range of bilateral issues, not just counterterrorism," Powell told reporters during a brief swing through Jakarta as part of an eight-nation tour that has focused on terrorism.

"We admire Indonesia so much as a Muslim nation which at the same time has great diversity within that nation and allows that diversity to flower in a way that benefits the whole society."

In the capital, Jakarta, Powell faced his most grueling day of a six-country Asia tour that started July 26.

He dined with Megawati, met three Cabinet ministers and held talks with Muslim leaders before flying to the Philippines later Friday.

The U.S. government's wooing of Jakarta mirrors fears in Washington and in Asia about Indonesian Islamic groups linked to the al-Qaida terror network and how they may try to use the chain of 13,000 poorly policed islands as a safe haven.

Indonesia's Foreign Minister Hassan Wirayuda said after meeting Powell that his country will "strengthen its capacity to deal with terrorism" and denied it is a hotbed of Islamic extremism.

"We don't believe that Indonesia will be the future Afghanistan," he said.

"We have full confidence in President Megawati and her officials and (the military) to deal with threats," Powell said.

The Senate Appropriations Committee recently voted to remove a ban on military training for Indonesia, a measure that has yet to be approved by the full Congress.

Legislation passed by Congress on July 25 gave $16 million to the police, including $12 million to set up an anti-terrorism unit.

After the Sept. 11 attacks, the White House lifted a sales embargo on non-lethal commercial arms to Jakarta, but the proposed legislation to reinstate military assistance includes human rights conditions on arms transfers.

On Friday, Powell said renewed military training marks the start of a wider partnership with the Indonesian armed forces.

"This is just a beginning and there are many stops along the way until we get to a full resumption of full military-to-military activity and cooperation," he said.