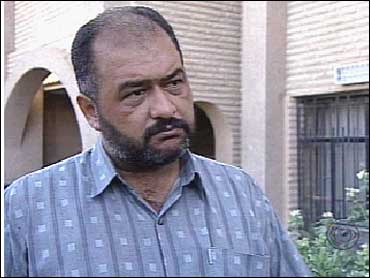 Amnesty International is looking into a number of cases of suspected torture in Iraq by American authorities. One of case involves Khraisan al-Aballi.

Al-Aballi's house was raided by American soldiers, who came in shooting and arrested Khraisan and his 80-year-old father. They shot and wounded his brother Dureid.

Dureid was carrying a weapon. His brother says Dureid thought the Americans were looters.

The three men were taken away. Khraisan and his father went to the U.S. detention center at Baghdad's airport. They still don't know where his wounded brother is.

Khraisan says his interrogators stripped him naked and kept him awake for more than a week, either standing or on his knees, bound hand and foot, with a bag over his head.

"I asked him to kill me," says Khraisan.

After eight days, they let him and his father go.

Amnesty International is looking into the case, and others like it.

"This might have been a case of mistaken identity," says Liz Hodgkin of Amnesty International. "The United Nations Committee Against Torture has stated quite clearly that these methods constitute torture. The U.S. has signed up to high standards. It's not keeping them."

U.S. officials did not respond to repeated requests to discuss the case, but the American governor here insists that the U.S. does not torture prisoners.

"We are in fact, in fact, carrying out our international obligations, which I'm satisfied we are doing," says Paul Bremer, the U.S. administrator of Iraq.

Khraisan rejects American claims they are not using torture. "They are liars. They use it. They use it," he says. "They make me losing my mind."

In Saddam's day, countless Iraqis disappeared behind the walls of Abu Graib, one of the most notorious prisons in Iraq. It's open again for business with new wardens, the Americans.

Relatives looking for any information about their loved ones still inside line up at the gate. They are told nothing.

The Americans, who should know whether Dureid is dead or alive, say they have no record of him at all.