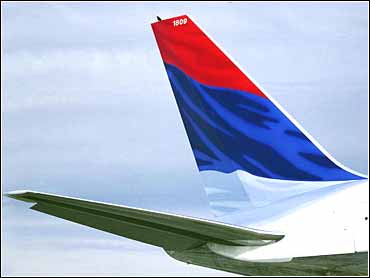 Delta Air Lines' projection that it will be worth as much as $12 billion when it emerges from bankruptcy is "unrealistic," US Airways Chief Executive Doug Parker said Thursday as his company pushed ahead with its hostile bid to buy Delta.

"We think their valuation is way out of whack," Parker said during a conference call with analysts and reporters.

Parker said his company's analysis of Delta's stand-alone plan values Delta at $5.5 billion to $6.9 billion. He also said that while US Airways generally agrees with Delta's profit projections for 2007, his company believes Delta's projections beyond that are too rosy.

"We are not going to let this transaction fail on antitrust issues," Parker said.

Parker added, regarding regulatory review: "This is not an issue from our perspective. The other side continues to say that it is. All we say is, 'Let's go find out.'"

A Delta representative did not immediately return an e-mail seeking comment.

Delta says in its reorganization plan, which it filed Tuesday, that after bankruptcy it will be worth $9.4 billion to $12 billion. US Airways says the amount it is offering is Delta's true value. Creditors must decide which proposal makes the most sense.

Parker's comments came after the unsecured creditors committee in Delta's bankruptcy case, which holds a key role in deciding the carrier's fate, said Wednesday it supports Delta's decision to file its stand-alone reorganization plan, but that it also will weigh alternatives.

The committee had been largely silent since US Airways' unsolicited bid for Delta was disclosed on Nov. 15.

The committee did not elaborate on its views, and a lawyer for the committee, Daniel Golden, did not return repeated calls and e-mails seeking comment.

Some observers believe US Airways will raise its offer, while others say to do so now would be premature.

Parker did not immediately address whether US Airways would raise its offer during Thursday's conference call.

US Airways was formerly based in Arlington, Va.

Parker did say he believes Delta employees and members of the public will ultimately embrace US Airways' offer, despite the decision by Delta's board to formally reject the offer and Delta employees' decision to protest the offer.

"The fact of the matter is the proposal is a very labor-friendly proposal," Parker said. "Every employee will be at least as well-off as they are today."

During the conference call, an analyst asked Parker how US Airways moves its buyout offer ahead and into bankruptcy court.

For now, Parker said US Airways will continue to talk to Delta's unsecured creditors committee and try to force the issue that way.

"I'd much prefer for this to be where the management team finally comes to grips with this, `Now we understand,'" Parker said of Delta. "I've passed the threshold of believing that's going to happen anytime soon."

But, Parker added, "Management doesn't own the company. The creditors do."