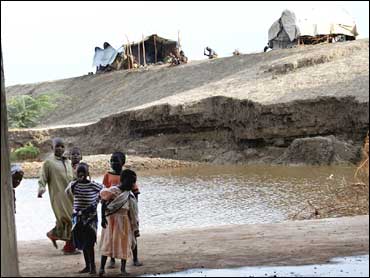 Australian newspapers on Wednesday quoted Taurima as saying that because of the cool conditions expected for the Sydney Olympics, "you can pretty much knock out all the dark athletes."

"We jumped in Salamanca (Spain) a month ago, and those guys just couldn't compete well in bad conditions," he said. "It was wet and cold."

Lister, winner of the U.S. Olympic trials, and Stringfellow, the U.S. indoor champion and NCAA outdoor champion, both of whom are black, were seething when told of Taurima's statements.

"I would rank them the same as the John Rocker comments," Stringfellow said, referring to the Atlanta Braves' reliever who in December made disparaging remarks about foreigners, gays, women and New Yorkers. "That was very unprofessional on his (Taurima's) part. Maybe he doesn't know any better."

Lister said: "I can understand him having the confidence to beat us - but to come at us racially. I want him to know I wasn't satisfied with the comments he made. All that can do is cause animosity between the U.S. and Australia."

Taurima who is described as half Maori, the indigenous people of New Zealand - also dismissed any chance of U.S. long-jumpers winning a medal in Sydney. Dwight Phillips, the third U.S. jumper, has not arrived in Australia.

"Americans are Americans, aren't they?" he said. "They only jump big in America. These three guys are a bunch of dribblers. That's all I'm saying. I'm more scared of the two Ukraine and two Russian guys."

"What's a dribbler?" Stringfellow said. "This is my official invitation to the Olympic Games. He's somebody who won't be able to back up what he says. He just stuck his foot in his mouth.

"Rivals? We don't even count him."

Lister said: "Who is he anyhow? ... His teammates don't even have any respect for him. It's also a proven fact that we Americans have come overseas and jumped well."

Lister and Stringfellow promised to beat Taurima when they meet Sunday in a tuneup meet for the games.

"I wasn't going to jump," Stringfellow said, "but I am now. And mark this down: Whatever he jumps in the first round of the games, I'm going to jump 20 meters farther."

Lister said: "I don't even think he's going to be a factor."