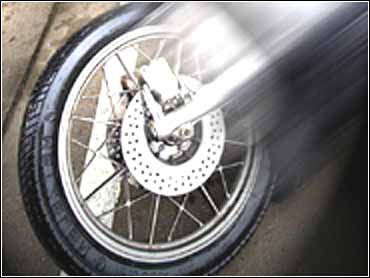 An American motorcycle stuntman twice broke the world record for the longest distance jumped on a Harley-Davidson motorcycle Tuesday, sailing through the air near Australia's Sydney Harbour to shatter the previous 10-year-old record.

Seth Enslow flew to a new record distance of 183.7 feet on his Harley-Davidson XR1200 shortly after a 175 foot jump. Bubba Blackwell set the previous record with a 157 foot jump in Las Vegas in 1999.

"This is awesome! I'm stoked!" Enslow said after entering the record books.

Enslow appeared to be in pain after the jump, but members of his stunt team said he was fine.

Enslow's jump is not a Guinness World Record as Guinness has no category for specific motorcycles, but it still stands as a world record. Evel Knievel set the record in 1975 and held it for 24 years before Blackwell's jump.