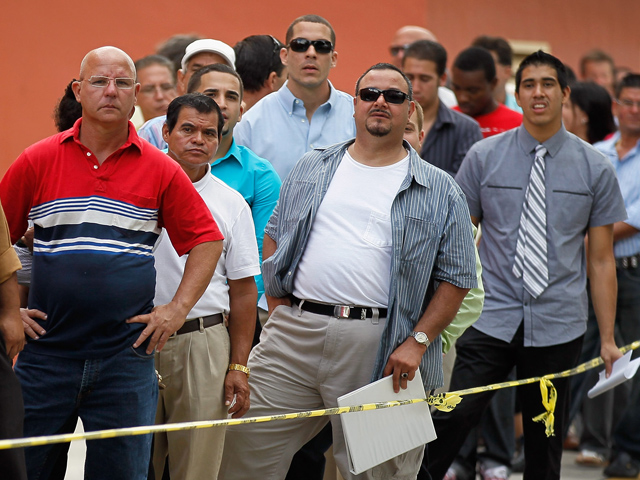 (AP) WASHINGTON - U.S. employers posted fewer jobs in July than in June, further evidence that hiring may stay weak in the coming months.

The data follow Friday's disappointing employment report, which said the economy added only 96,000 jobs in August. That's below July's total of 141,000 and the average 226,000 a month added in the first three months of the year. The unemployment rate fell to 8.1 percent from 8.3 percent, but only because the number of people working or looking for work fell.

The drop in available positions has made job hunting more competitive. Nearly 12.8 million people were unemployed in July, meaning 3.5 people were competing for each open position.

Job openings have increased 68 percent from 2.2 million over the past three years. But companies aren't filling them quickly. Total hiring has increased only 11 percent in that stretch.

There are several reasons companies aren't hiring faster, economists say. Companies may not be offering sufficient pay to entice workers to take the jobs. Some employers say they can't find enough skilled workers in certain industries, such as information technology.

Businesses are also worried about Europe's financial crisis, slowing growth in China and the pending expiration of tax breaks in the United States.

"It's all I hear about," he said. Some of his company's clients say, "Our business is good, but we're worried," he added.

Employers are still posting fewer jobs than before the recession, when they advertised about 4.4 million a month.

In July, the number of available jobs fell in manufacturing, health care, and professional and business services, a category that includes engineers, accountants and lawyers.

Tuesday's report, known as the Job Openings and Labor Turnover survey, shows the amount of hiring and firing that takes place in the U.S. each month. It provides more details than the monthly jobs report.

Layoffs fell to 1.6 million in July. That's the lowest level in the 10 years the government has tracked the data. It shows companies aren't cutting jobs, despite their worries about future growth. It's also likely why weekly applications for unemployment benefits have trended down recently.

But they aren't adding many either.

Overall, employers hired 4.2 million people in July, down from almost 4.3 million in the previous month. Before the recession, total hires routinely topped 5 million.