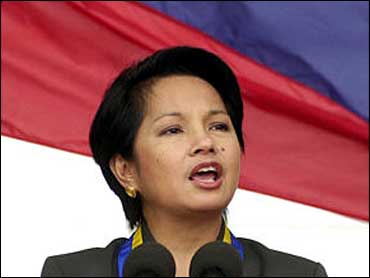 Philippine President Gloria Macapagal Arroyo tried Friday to quash rumors of a coup plot by disgruntled military officers, telling the public there was no cause for alarm.

"We call on the public to remain calm amid these rumors of destabilization," Arroyo said in a statement. "The chief of staff is on top of the situation and there is no cause for alarm."

Arroyo, a staunch U.S. ally in the war on terror and in Iraqi reconstruction, was welcomed with the pomp of a state visit in May — only the third such visit of Mr. Bush's presidency, and the first by the head of state of an Asian nation.

At an East Room news conference, the president called Arroyo "a friend of America and a friend of freedom." He also named the Philippines a major "non-NATO ally," a designation that gives the country greater access to U.S. defense equipment and supplies.

President Bush plans to visit the Philippines in the fall.

Arroyo Friday acknowledged the existence of "legitimate grievances" by young military officers and said she already talked to their representatives, who assured her of their absolute loyalty to the military chain of command.

She said she does not blame the young officers for pushing for internal reforms and that their grievances are being addressed.

"The expression of their grievances has been proper and lawful," Arroyo said.

Local media have reported that junior officers have been meeting to discuss their gripes, including low and unequal pay among the different service branches, and alleged corruption among senior military officials.

The reports also said there were "unusual troop movements," and that the military has been put on heightened alert as a result.

Officials, however, have been denying any coup plot and said the heightened alert was part of normal security preparations for Arroyo's annual state of the nation address before Congress next week. The policy address is usually picketed by anti-government groups.

Arroyo met Wednesday night with junior officers from the elite Philippine Military Academy Classes 1994 and '95, who "gave the assurance to the president that they are not thinking of any destabilization moves although they do have grievances," her spokesman, Ignacio Bunye said it a radio interview.

"Our president is open to resolving these grievances of our young officers," he added.

Arroyo was among the first world leaders to call President Bush and express condolences after the Sept. 11, 2001, attacks. Arroyo and Prime Minister Goh Chok Tong of Singapore were the only two Southeast Asian leaders to support the U.S.-led war in Iraq, and she expelled three Iraqi diplomats after Mr. Bush asked allies to do it.