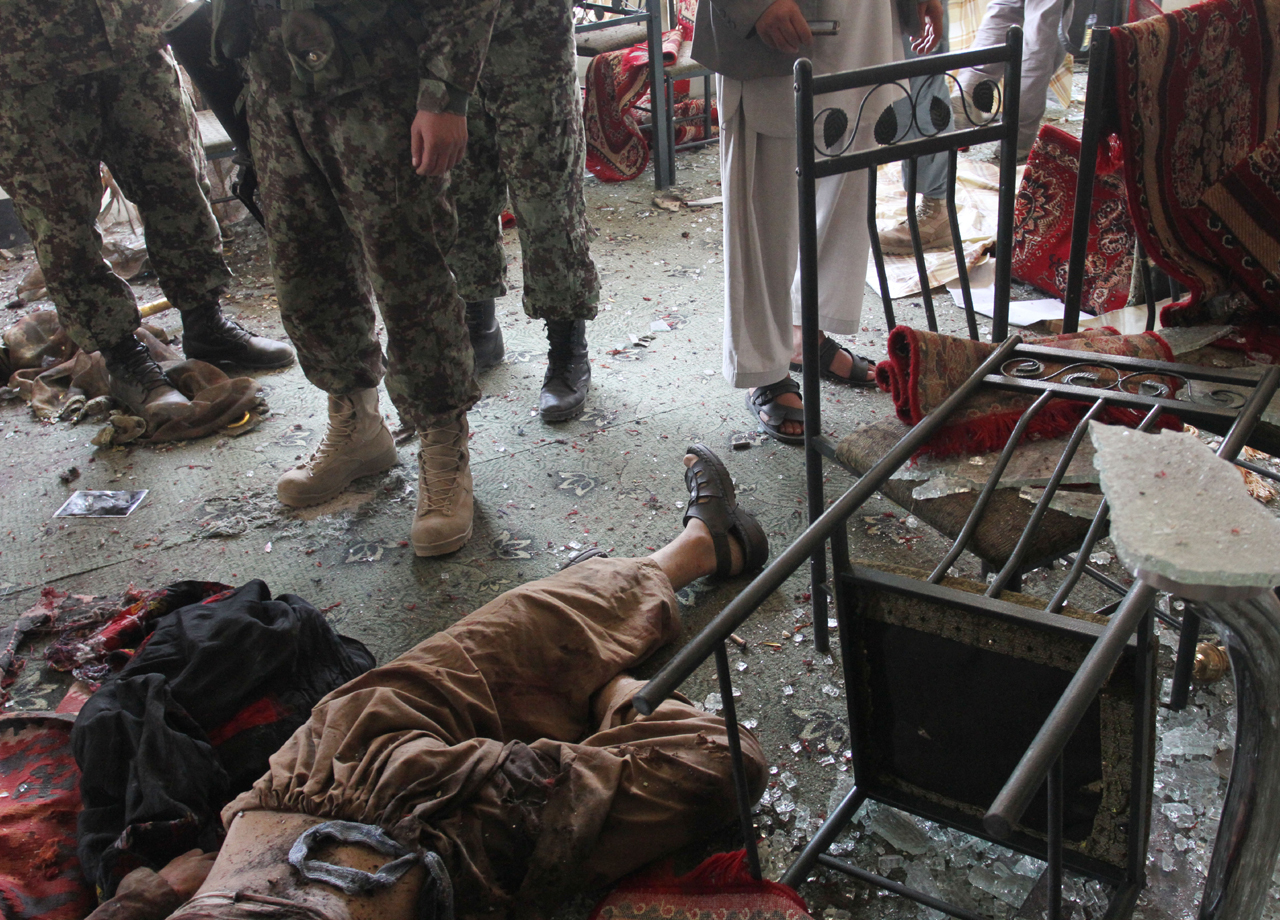 (CBS/AP) KABUL, Afghanistan - The commander of U.S. and NATO forces in Afghanistan said a militant attack on a lakeside hotel in which 18 people were killed was likely carried out by fighters loyal to the Haqqani network.

The al Qaeda-linked group is based in Pakistan and regularly targets Afghan and coalition forces in Afghanistan, and conducts deadly attacks in Kabul.

Late Thursday heavily-armed Taliban insurgents stormed the Spozhmai hotel at Qargha Lake, a popular weekend retreat about a half-hour drive north from the capital Kabul, and opened fire on guests inside. Most of those killed were civilians.

"This attack bears the signature of the Haqqani network, which continues to target and kill innocent Afghans and blatantly violate Afghan sovereignty from the safety of Pakistan," U.S. Gen. John R. Allen said.

Allen said that some victims were killed in their sleep.

He added that the coalition provided "minimal support" at the Afghans' request.

Officials have told The Associated Press that U.S. military and intelligence officials are so frustrated with Pakistan's failure to stop local militant groups from attacking Americans in neighboring Afghanistan that they have considered launching secret joint U.S.-Afghan commando raids into Pakistan to hunt them down.

But the idea, which U.S. officials say comes up every couple of months, has been consistently rejected because the White House believes the chance of successfully rooting out the deadly Haqqani network would not be worth the intense diplomatic blowback from Pakistan that inevitably would ensue.

The al Qaeda-allied Haqqani tribe runs a mafia-like smuggling operation and occasionally turns to terrorism with the aim of controlling its territory in eastern Afghanistan. The Haqqanis use Pakistani towns to plan, train and arm themselves with guns and explosives, cross into Afghanistan to attack NATO and Afghan forces, then retreat back across the border to safety.

Earlier this month in Kabul Defense Secretary Leon Panetta voiced frustration with Pakistan's failure to tackle the tribe's safe havens, saying the U.S. was "reaching the limits" of its patience. He added that the U.S. was "extraordinarily dissatisfied with the effect that Pakistan has had on the Haqqanis."

The brazen attack was a dramatic reminder of the Taliban's resiliency as insurgents push hard with their summer offensive in a show of strength as U.S.-led forces prepared to withdraw by the end of 2014.

Insurgents first killed the security guards at the hotel, then pushed their way inside and began firing at guests who were having a late-night meal. Some of the guests escaped while others were held hostage as the attackers battled Afghan security forces who rushed to the scene for the next 12 hours.

Mohammad Zahir, criminal director for Kabul police, said the hotel was crowded when the attackers entered and opened fire on families having a late dinner.

Mohammad Qasim, who survived the attack, said he went to the reception desk to tell the manager that he suspected that militants had entered the hotel.

"Before I finished talking with the manager, they fired on us," Qasim said. "(The manager) hid himself behind his desk, but around three to four other guys who were guards and waiters were killed by the attackers."

Afghan President Hamid Karzai condemned the assault, the latest in a string of attacks this week.

Taliban spokesman Zabiullah Mujahid said the Taliban attacked the hotel because foreigners there were drinking alcohol and participating in other activities banned by Islam, but that was disputed by the Kabul police.

"The Taliban propaganda is saying that there was immoral activity there and that people were drinking alcohol," said Zahir, the criminal director for the Kabul police. "That is totally wrong. These are people who had worked all week and had gone to the lake to have a restful dinner with their families. The view there is very good for relaxation. There is no alcohol."

The hotel, situated on a man-made lake, is a popular place for well-to-do Afghans to spend Thursday night — the beginning of the Afghan weekend — or for picnic excursions on a Friday when paddleboats and horseback riding are on offer. Though international workers do go to Qargha lake, Afghans make up the majority of the clientele at the hotels and kebab shops along its shore.

Security at the lake is light compared with targets inside the Afghan capital, which has been hit frequently as the Taliban show they can still strike very close to the seat of the Afghan government. While hotels at the lake have armed guards, there are no massive blast walls and security cordons that surround government and military buildings in Kabul. Zahir said only two of the three guards killed at the hotel were armed.

The hotel was a soft target compared with the attacks insurgents have launched inside the city in recent years, including taking over construction sites and firing down on embassies and storming the tightly secured Intercontinental Hotel in Kabul last summer.

The week has been particularly violent in Afghanistan, as insurgents stepped up attacks against international forces. On Wednesday, a suicide bomber attacked U.S. and Afghan forces at a checkpoint in a busy market in the east, killing 21 people, including three U.S. soldiers. The same day, seven Afghan civilians were killed by a roadside bomb.

Those bombings came the day after two attacks in the south in which militants stormed a NATO military base and attacked a police checkpoint. U.S. troops were wounded in the attack on the NATO base, officials said. On Monday, three gunmen dressed in Afghan police uniforms killed one American service member and wounded nine others in Kandahar's Zhari district.

The fighting suggests that the Taliban are not planning to wait for international combat forces to complete their exit from Afghanistan at the end of 2014. The commander of U.S. and NATO forces in Afghanistan, Marine Gen. John Allen, has to withdraw 23,000 American troops by the end of September, leaving about 68,000 U.S. military personnel in the country.