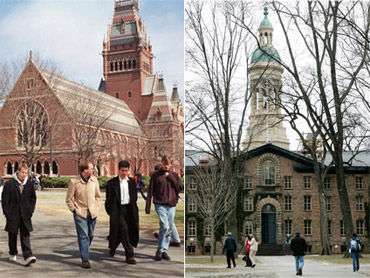 (AP)
If you're a glass half-full kind of person, then the recent report from the Council of Graduate Schools should reaffirm the comfortable conviction that the United States' higher educational system remains the envy of the world. To be sure, the reported 4% uptick in international applications seemingly demonstrates that we haven't lost our edge. Proof positive that they adore us out there, right? Actually, the details suggest a less exultant narrative.

The first worry sign is that the total number of graduate applications from international students still remains below 2003 numbers. What's more,there was a 3% decline in graduate school admissions to overseas applicants between 2008 and 2009. That's the first time this has happened in five years.

The global economy's weakness played an obvious part. Faced with the worst financial crisis in decades, colleges and universities with more limited resources are being forced to rein in their international recruiting because of smaller budgets. At the same time, the global recession contributed to a sharp dropoff in applications from students in India and South Korea, two countries that send thousands of their nationals to U.S. colleges and universities each year.

The encouraging news is that the decline does not reflect a perceived decline in educational quality, according to Nathan Bell, the principal researcher and author of the report. "We still receive more applications than there are slots available," he told me.

So, what then? To be sure, rising anti-immigrant emotions inform the debate. That's led some to offer the breathless conclusion that we're on the cusp of a culminating moment for nativists pushing an America for Americans agenda. If it were only that simple. (After post-September 11 decline, the number of graduate students arriving from the Middle East has reversed course and increased at a double digit clip in the last 4 years.)

Policy makers face a more complicated challenge. Any way you do the math, the share of the world's graduate students heading for our shores is shrinking. The U.S. now faces stepped-up competition from Europe and Asia for the world's best and brightest students. Unlike the post-World War 2 era, when those two continents lay in shambles, they can offer compelling stories to compete with the U.S. for top talent. Who else is tossing its hat into the ring? China. Beijing has watched how the U.S. benefited from welcoming foreign-born graduate students and now it wants to apply the example. Given their economic track record, who's ready to bet they won't acquit themselves nicely?

Out in the San Francisco Bay Area, where I'm based, Silicon Valley has benefited mightily from foreign-born graduates of U.S. universities. Many have stayed on after completing their post-graduate studies and made a huge impact. Just how major a contribution to the local economy was underscored by a Duke University study which found that more than 25% of the high-tech and engineering firms in the U.S. formed between1995 to 2005 included at least one founder born outside of the United States. None of this may draw the attention of a Keith Olbermann-Bill O'Reilly spit fight, but it should. An advantage that's helped the U.S. stay ahead of its economic rivals for a generation may be slipping away.

According to Bell, the U.S. remains the No. 1 destination for international students. But the lesson to be learned, he adds, "is that we cannot take for granted that they will automatically come to our programs in the future."