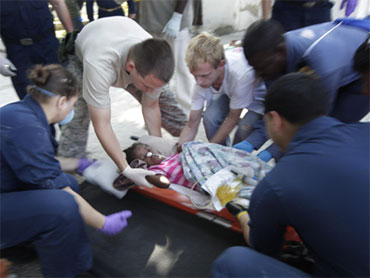 The U.S. military has halted flights carrying Haitian earthquake victims to the United States because of an apparent cost dispute, and a doctor warned that some injured patients faced imminent death if the flights don't resume.

However, Dr. Barth Green, a doctor involved in the relief effort in Port-au-Prince, warned that his patients needed to get to better hospitals.

"We have 100 critically ill patients who will die in the next day or two if we don't Medevac them," said Green, chairman of the University of Miami's Global Institute for Community Health and Development.

At a temporary field hospital at Haiti's international airport, set up with donations to Green's institute, two men had died of tetanus and a 5-year-old girl suffering from tetanus in a small leg wound would likely die within 24 hours unless evacuated, doctors said.

"If we can't save her by getting her out right away, we won't save her," said Dr. David Pitcher, one of 34 surgeons staffing the field hospital.

There were some states that would not accept patients who needed care in the U.S., and they could not be transported without a hospital to accept them, Aandahl said.

Aandahl declined to specify which states declined to accept patients, and he referred further questions to a Pentagon press office, where an after-hours answering service could not accept incoming messages Saturday.

The story was first reported by The New York Times.

Florida officials said Saturday that they were not aware of any hospital in Florida refusing to take in the patients. However, in a letter Tuesday to Health and Human Services Secretary Kathleen Sebelius, the Republican governor said "Florida's health care system is quickly reaching saturation, especially in the area of high level trauma care."

Crist asked Sebelius to activate the National Disaster Medical System, which is typically used in domestic disasters and pays for victims' care. His letter did not indicate how much victims' care was costing Florida, though he noted the state's health care system was already stretched by the winter tourism season and annual "snowbird" migration of seniors from northern states and Canada.

Those children already were being adopted by families in Utah, said Sterling Ivey, the governor's spokesman.

Crist said his state remains committed to caring for injured earthquake victims and reuniting families, though he was reaching out to other states to help care for them as well.

Crist's letter to Sebelius outlined Florida's relief efforts, including 436 patients admitted to hospitals. Nearly all those patients suffered multiple traumas, and a quarter of them were under the age of 18, the governor wrote.

"Recently we learned that federal planning is under way to move between 30-50 critically ill patients per day for an indefinite period of time," Crist told Sebelius, saying Florida could not handle such an endeavor.

More than 400 U.S. citizens, Haitian nationals and other foreign nationals have been treated at South Florida hospitals since the Jan. 12 earthquake, including 136 who remain hospitalized, said Jeanne Eckes-Roper, the health and medical chairwoman of a state domestic security task force for the South Florida region.

About 75 additional patients were flown to Tampa area hospitals after she requested on Monday that new patients be taken elsewhere in Florida, Eckes-Roper said.

"We had to make sure we did not overwhelm our capacity," she said. "We stand ready to take whatever the government wants to give us."

Aandahl said no evacuation requests have been made by U.S. military medical facilities in Haiti, including the hospital ship the USNS Comfort, since the flights were suspended Wednesday.

There were limited medical evacuations by the U.S. military after the Jan. 12 earthquake, he said.

"It wasn't a lot of flights - probably a dozen, maybe less, maybe more, but not a large number," Aandahl said.