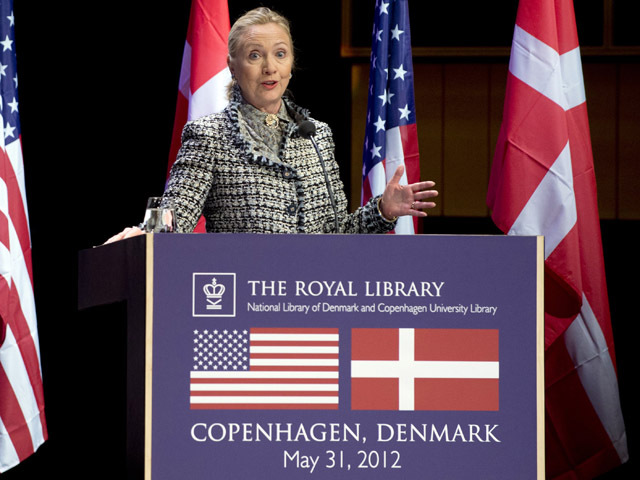 (AP) COPENHAGEN, Denmark - The U.S. is heaping new pressure on Russia to change course and support international action in Syria, warning that intransigence by Moscow may lead to open civil war that could spill across the Middle East with devastating effects.

Speaking on Russia's doorstep in Denmark, Secretary of State Hillary Rodham Clinton derided the Russian government for continuing to support Syrian President Bashar Assad, even after last week's massacre of more than 100 people in the town of Houla. In pointed remarks Thursday, she said Russia's position "is going to help contribute to a civil war" and rejected Russian officials' insistence that their stance actually is helping to ease the crisis.

On the first stop of a European tour, Clinton said Russia and China would have to be on board before the U.S. and other nations might engage in what could become a protracted conflict in support of a disorganized rebel force.

Russia, along with China, has twice vetoed U.N. Security Council sanctions against Syria. Russia is Syria's closest ally other than isolated Iran, and Clinton said that without its support the international community is essentially frozen from taking concrete steps to end the violence.

"The Russians keep telling us they want to do everything they can to avoid a civil war because they believe that the violence would be catastrophic," Clinton said, noting that they are "vociferous in their claim that they are providing a stabilizing influence."

"I reject that," she said, complaining that in fact Russia is propping up Assad as his government continues a brutal, 15-month crackdown on dissent in which some 13,000 people have died.

In Syrian town of Houla, a "vigil of despair"
U.S. warns of failed Syrian peace plan

A day earlier, White House Deputy National Security Adviser Denis McDonough said the U.S. is lobbying Russia to distance itself from its ally Syria and to apply pressure on Assad to leave office. A negotiated exit similar to one the U.S. helped broker for Yemen's longtime leader is one possibility, McDonough said, but he offered little optimism that the arguments are gaining traction.

The Obama administration has called on Assad to step down and clear the way for a political transition. But mindful of a war-weary American public, it has stopped short of advocating direct U.S. military engagement in the country and stressed the need for diplomacy, particularly with Moscow, which continues to sell weapons and provide political support to Assad.

In Washington, despite revulsion over the Houla massacre, officials said the administration remains deeply concerned about the possible consequences of military action. But as the violence continues, they acknowledge that planning for some sort of intervention is under way.

Two Western diplomats told The Associated Press that top U.S. and British commanders and intelligence officers visited the northern Jordanian city of Ramtha recently and toured the area along the Jordan-Syria border to assess the possibility of a limited land attack. But it was decided that air attacks would be best, considering the mostly bushy terrain and climate conditions, the diplomats said.

Still, Clinton told reporters after meeting top officials in Denmark, a key contributor to last year's NATO-led mission against Moammar Gadhafi in Libya that "we're nowhere near putting together any type of coalition other than to alleviate the suffering."

"We are working very hard to focus the efforts of those, like Denmark and the United States, who are appalled by what is going on, to win over those who still support the regime, both inside and outside of Syria."

Defense Secretary Leon Panetta, in remarks to reporters traveling with him Thursday to a conference in Singapore, said he does not see the U.S. taking military action in Syria without the backing of a U.N. Security Council resolution.

"No, I cannot envision that," Panetta said when asked about military action without U.N. backing. Still he said that all options remain on the table and that the Pentagon is planning for "any contingency."

At the White House, press secretary Jay Carney was blunt in describing the risks posed by the protracted standoff with Assad.

"The longer this goes on, the longer that Assad and his thugs are allowed to brutally murder the Syrian people, the more likely it becomes a sectarian civil war, the more likely that it spills over Syrian borders," Carney said. He listed another risk, of a "proxy war" with Iran backing Assad and other outside nations or forces backing insurgent factions.

The prospect of such a proxy war or a sectarian conflict along the lines of Lebanon is a major reason the United States is leery of arming the Syrian rebels or edging toward direct military involvement, though U.S. officials rarely say so.

Jordan has concerns about its territory, the Turks worry over Kurdish terrorists operating from inside Syria and neighboring Lebanon's is still struggling to emerge from decades of sectarian civil war and political instability.

Still, Moscow's calculus doesn't appear to be changing. Russia did begin inching away from Assad, particularly after the massacre in which dozens of women and children were among those shot at close range by pro-regime gunmen. And Foreign Minister Sergey Lavrov said this week that while both sides are to blame, Assad "bears the main responsibility for what is going on."

However, he also said the Houla massacre must not be a pretext to push for military intervention from outside. Instead, he urged all sides to focus on U.N. mediator Kofi Annan's peace plan, which by all accounts has failed to stem the violence.

Other than Russian opposition, there are other hurdles to armed intervention, U.S. officials said.

Clinton said Assad's foes lack the unity that the anti-Gadhafi camp eventually rallied in Libya. Syria's professional military and substantial air defenses also would make intervening far more difficult. And whereas in Libya the U.S. was able to count on the support of Gulf countries in monitoring a no-fly zone and carrying out some airstrikes, the Arab League is split on whether military options should be entertained in Syria.

"We know it could actually get much worse than it is," Clinton said. "We are trying to prevent that." Clinton underscored her support for the U.N. mediation effort, which she said had had some positive results even though none of its six points have been achieved. She stressed that U.N. observers have performed two important functions.

"In many of the areas where they are present, violence has gone down," Clinton said. "And they serve as independent observers, the eyes of the world if you will, in reporting back when terrible events like the recent massacre occur. They've tried to cut through the clutter and disinformation coming from the Syrian government."

She spoke as activists reported more shelling in the central Houla area.

The Britain-based Syrian Observatory for Human Rights and the Local Coordination Committees activist groups said Thursday's shelling of Houla was mostly by heavy machine guns. Survivors of last week's massacre blamed pro-regime gunmen for the close-range shooting of civilians in their homes, though the government denied the involvement of its troops.

Carney said the U.S. can't deal with Syria by itself.

"There is no question that as mighty as the United States is, that we cannot end all atrocities around the globe," Carney said.

The United States must approach world problems with an eye to its own national security interests and to what is possible to achieve, Carney said, while "making sure you're not taking actions that create unintended consequences that are bad for the United States and bad, in some cases, for the very people you're trying to help."