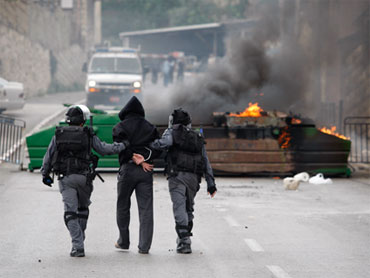 A U.S. envoy's postponement of his Mideast trip appeared Tuesday to deepen one of the worst U.S.-Israeli feuds in memory - even as Israel's foreign minister signaled his government had no intention of curtailing the contentious construction at the heart of the row.

CBS Radio News correspondent Richard Berger reports that the violence erupted after Hamas called a "day of rage" to protest Israel's consecration of an ancient synagogue in Jerusalem's Old City.

Hundreds of Palestinians hurled rocks at police and set tires and garbage bins ablaze across the holy city's volatile eastern sector, where the construction is planned. Plumes of black smoke billowed and the air reeked of tear gas in the heaviest clashes in the city in months.

Youths in one east Jerusalem neighborhood hoisted a giant Palestinian flag and shouted, "We'll die in Palestine, Palestine will live."

Thousands of police, including anti-riot units armed with assault rifles, stun grenades and batons, were deployed across east Jerusalem to stifle the unrest. No serious injuries were reported.

The diplomatic crisis erupted last week after Israel announced during a visit by Vice President Joe Biden that it would build 1,600 apartments for Jews in disputed east Jerusalem, the sector of the holy city that the Palestinians claim for a future capital.

The announcement enraged Palestinians, who have threatened to bow out of U.S.-brokered peace talks that were supposed to begin in the coming days. The Obama administration, fuming over what it called the "insulting" Israeli conduct, has demanded that Israel call off the project.

Foreign Minister Avigdor Lieberman told Israel Radio that demands to halt Israeli construction there "are unreasonable" and predicted the row with the U.S. would blow over, saying neither side had an interest in escalation.

But Washington notified Israel early Tuesday that envoy George Mitchell had put off his trip indefinitely. Mitchell had planned on coming to wrap up preparations for relaunching Israeli-Palestinian peace talks. But now it's not clear when the indirect talks, to be mediated by Mitchell, will begin.

Israeli Prime Minister Benjamin Netanyahu has apologized for the timing of the project's approval, but he has not said it would be canceled. On Monday, he defended four decades of Jewish construction in east Jerusalem and said it "in no way" hurts Palestinians.

The feud is feeding already high tensions in east Jerusalem, where Jews and Palestinians live together uneasily.

The violence also threatened to spread to the West Bank. At the main checkpoint between the West Bank and Jerusalem, dozens of Palestinian teens threw rocks and a few firebombs at Israeli troops, who responded with tear gas and rubber bullets.

In east Jerusalem, security forces, some on horseback, charged a group of more than 100 youths, who had set garbage bins afire and lobbed rocks at police. Palestinian merchants shuttered their stores, and Palestinian schools in the city were closed.

Palestinian officials called on the public to defend Muslim religious interests in Jerusalem following the rededication Monday of a historic synagogue in the Jewish quarter of the Old City.

The rededication has stoked recurring but unsubstantiated rumors that Jewish extremists are planning to take over the hilltop shrine at the crux of the Israeli-Palestinian conflict.

The site, known to Jews as Temple Mount, was home to the biblical Jewish temples and is Judaism's holiest site. Muslims call it the Noble Sanctuary and it hosts the Al-Aqsa mosque complex, Islam's third-holiest shrine.

But the outbreak of violence also appeared to reflect deeper frustration amid a yearlong standstill in peace efforts.

Palestinians, who number about 250,000 in east Jerusalem, see the building of new settlements and the presence of some 180,000 Jews there as a grave challenge to their claims to the territory.

Israel annexed east Jerusalem after capturing it from Jordan in the 1967 Mideast war. Most Israelis accept the Jewish neighborhoods in east Jerusalem as part of Israel, and previous peace proposals have allowed them to remain in Israeli hands.

But the international community does not recognize the annexation and considers the Jewish neighborhoods in east Jerusalem as illegal settlements.

"I'm really pleased with the fact that the international community and the U.S. now have a realization of the side that is trying to obstruct the peace process," he said.

The rift has presented Netanyahu with a predicament. If he doesn't make gestures toward the U.S., he risks further antagonizing Israel's most important ally, but he could see his hawkish governing coalition crumble if he compromises on Jerusalem.

Continued confrontation is also risky for President Barack Obama, who risks setting off a fight with Congress if he pushes Israel too hard. A bipartisan parade of influential U.S. lawmakers and interest groups has taken aim at the administration's decision to publicly condemn Israel.