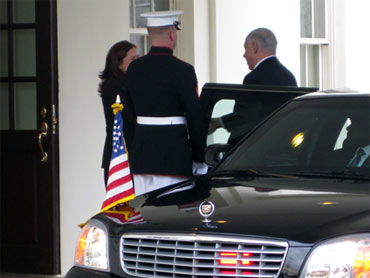 The United States and Israel engaged in overtime talks Wednesday trying to win agreement on gestures Israel can take to restore confidence among Palestinians and the Obama administration and salvaging a diplomatic visit marred by the worst U.S.-Israeli breach in years.

U.S. officials told The Associated Press that the closed-door talks were aimed at getting Israeli-Palestinian peace talks back on track.

The officials, who spoke on condition of anonymity to discuss the confidential session, said the administration's special Mideast envoy, George Mitchell, met late Wednesday afternoon with visiting Israeli Prime Minister Benjamin Netanyahu, who extended his stay by hours to work on a deal.

They hoped to come up with mutually acceptable ideas to improve an atmosphere poisoned by announcements of new Jewish housing projects on land claimed by Palestinians in east Jerusalem.

Netanyahu twice pushed back his departure from Washington after talks with President Barack Obama, Vice President Joe Biden and Secretary of State Hillary Rodham Clinton failed to reach consensus on what Israel could do to repair damage caused by the housing announcements.

Another meeting with Obama was not expected and it appeared unlikely that the two sides would reach an agreement before Netanyahu flew back to Israel.

American officials said Netanyahu, who had been due to leave after seeing Obama on Tuesday and then postponed his departure until Wednesday morning and then again until late Wednesday night in order to see Mitchell, had stayed on to see if a compromise could be reached.

During Netanyahu's frosty visit, "the U.S. made clear it is looking for steps to increase confidence and show commitment to the process," said Mark Toner, the deputy State Department spokesman.

Earlier Wednesday, the Obama administration challenged Israel to explain yet another announced plan to expand Jewish housing in east Jerusalem, the same issue that soured U.S.-Israeli relations ahead of Netanyahu's three-day visit to Washington this week.

Palestinians claim east Jerusalem as the capital of a future independent state, and the United States sees continued Israeli building there as a provocation that makes peace negotiations harder.

Netanyahu offered no concessions during his visit on an earlier plan to build 1,600 homes for Jews in the disputed part of the city. Netanyahu's government has refused to back off steady expansion of Jewish neighborhoods in the majority Arab city section.

An aide to Netanyahu said the prime minister was caught off guard by the announcement Wednesday that the Jerusalem municipality has approved 20 new apartments for Jews.

Mitchell returned to the U.S. on Tuesday from talks with Palestinian leader Mahmoud Abbas on the West Bank, apparently without agreement on when the Palestinians would be willing to open a new round of U.S.-mediated talks.

U.S. officials said discussions about the peace talks continue, and Mitchell plans to return to the region after the Jewish Passover holidays, which begin next week.

In an exceptional step, no photographs of Netanyahu's meeting Tuesday with President Barack Obama at the White House were permitted, and neither side has provided a substantive account of the session.

Obama and Netanyahu initially conferred for about 90 minutes in the Oval Office, a half-hour longer than scheduled. After that meeting, Obama retired to the residence while Netanyahu stayed behind in the White House to consult with his staff in the Roosevelt Room, a White House official said.

Netanyahu then asked for a second meeting with Obama, who returned to the Oval Office for an additional 35 minutes of talks with the prime minister, said the official, who spoke on condition of anonymity to discuss the sensitive diplomatic issue.

Although they met for a total of two hours, the White House did not issue a formal statement on what was discussed in either meeting.

"I think it comes as a great shock to you and me, but not everything the president does is for the cameras and for the press," said Robert Gibbs, the White House spokesman.

Gibbs would say only that the discussions were "honest and straightforward" and that Obama had urged Netanyahu to take a series of steps to build confidence in Israel's ability to take part in peace talks with the Palestinians. He would not elaborate about those steps.

Meanwhile, a White House spokesman, Tommy Vietor, said the White House continues to believe that Israeli construction in east Jerusalem is destructive to the Mideast peace process. He said the U.S. is asking for "clarification" of the latest building plan, and he urged both the Israelis and Palestinians to refrain from acts that could undermine trust.